Jupiter's faded belt: It's happened before, and it'll happen again

When I wrote a post about Jupiter's missing South Equatorial Belt in May, I had three main questions: how long did it take for the belt to go away, has this happened before, and how can a planet as big as Jupiter change its appearance so quickly? 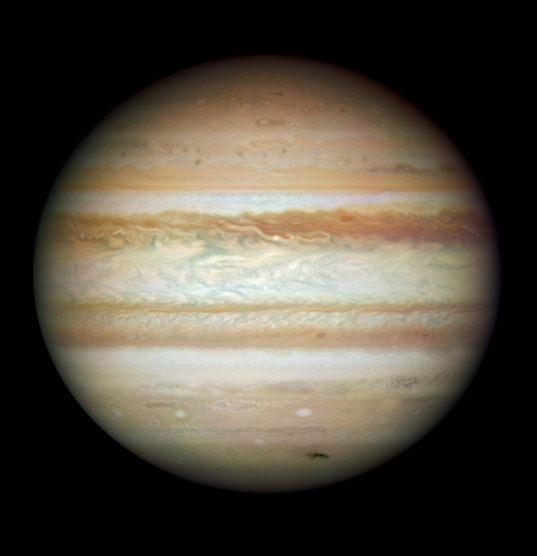 Compare that to a photo from Hubble taken two weeks ago: 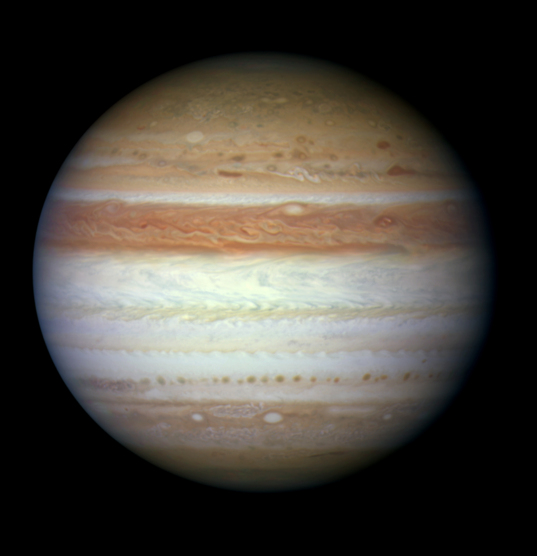 Hubble trained its Wide Field and Planetary Camera 3 on Jupiter on June 7, 2010 to search for any mark from the impact flash observed there by amateur astronomers on June 3. Hubble saw no mark, but the image also afforded an occasion to photograph Jupiter's newly whitened South Equatorial Belt.

The latest Hubble photo was motivated in part to search for any atmospheric mark from the impact flash observed by Christopher Go and Anthony Wesley on June 3, but no such mark was seen; this story from NASA addresses how that could be. Several readers have written to me asking if what Go and Wesley saw could have been lightning, and astronomers dismiss that possibility; no lightning could be so bright as to be seen on the day side of Jupiter from the distance of Earth.

It seemed to me that Jupiter is a common enough target for amateur astronomers, that more than a few people should have noticed the belt disappearing. I wandered around the Internet for a while trying to discover some names of amateur Jupiter observers other than Go and Wesley, and I stumbled into a gold mine: the Planetary Virtual Observatory & Laboratory, a database of planetary photos developed under the aegis of the International Outer Planets Watch. I dove into the database and surfaced with images of Jupiter captured nearly every day since last summer, documenting the change in appearance of the belt.

From a selection of those images, I produced the following animation. I tried to find photos that didn't contain the Great Red Spot since it interrupts the South Equatorial Belt and distracts from what I was trying to see. I aligned the images and matched their sizes as best as I could do without spending too much time on it. It's clear that the different telescopes and filters used by the different astronomers result in a lot of variation in the appearance of Jupiter from one animation frame to the next. I've looked at this animation numerous times and I can't really put my finger on a date to say when the belt goes away -- it just fades slowly from view. In fact, it was already faded relative to the North belt on the date of the beginning of the animation, in November of last year; I think it was mostly gone before conjunction.

If you'd like to search the Jupiter images on PVOL and observe the changes for yourself, they have handy search tools. Put "RGB" in the "filter" dialog box if you want to find color photos.

So the answer to my first question -- when did this happen? -- is still "some time in the past year."

On to my second question, of whether this has happened before. The blog where I'd read about the event said that it happened every 3 to 14 years. I pulled out my copy of Bagenal, Dowling, and McKinnon's Jupiter (wow! A physical book!) and read a bit about the atmosphere and came across a reference to a paper published in 1996 by Agustin Sanchez-Lavega and J. M. Gomez: "The South Equatorial Belt of Jupiter, I: Its Life Cycle." It was published just after the South Equatorial Belt's last completed cycle of fading to white and darkening to red, and summarized the available historical records on the changes in this dynamic part of Jupiter.

The cycle goes like this: First, there is a global fade. Then there is an outbreak of activity, numerous spots forming. The outbreak expands to a global disturbance (global meaning it stretches 360 degrees in longitude, though it's confined in latitude). Then, sometimes but not always, the disturbance expands latitudinally, into the tropical and equatorial regions. In terms of timing, the "fade" period lasts 1 to 3 years, then a sudden instability lasting only days gives rise to a global disturbance lasting 1 to 6 months, then (maybe) it spreads to the tropical and equatorial regions for about a year, then it settles down into its ordinary belt-like appearance for anywhere from 1 to 14 years before beginning the cycle again.

Here is their table of past events, comprising a total of 14 cycles of fading and darkening. Because the onset of the instability in the faded belt is the shortest period, Sanchez-Lavega and Gomez pegged their calendar of events to that onset date. Before the dates specified, the belt was faded, looking more like Jupiter's pale zones; afterward, it was more belt-like. Judging from the use of symbols like "~" and "<" in the "length of previous fade" column, they, too, had difficulty identifying a single date to mark when the fade happened.

I sent an email to Sanchez-Lavega to ask him whether there had been any other major events since 1996, and he said no, this was the first major one, though "there was something like a 'partial fade' in 2007." Given this table, I thought it'd be kind of fun to take a look at some of the spacecraft visits to Jupiter and see where each photo was taken in the life cycle of the South Equatorial Belt. Here's a nice montage of Jupiter photos that I've posted before, showing Jupiter's varying appearance to the six spacecraft that have swung past it. 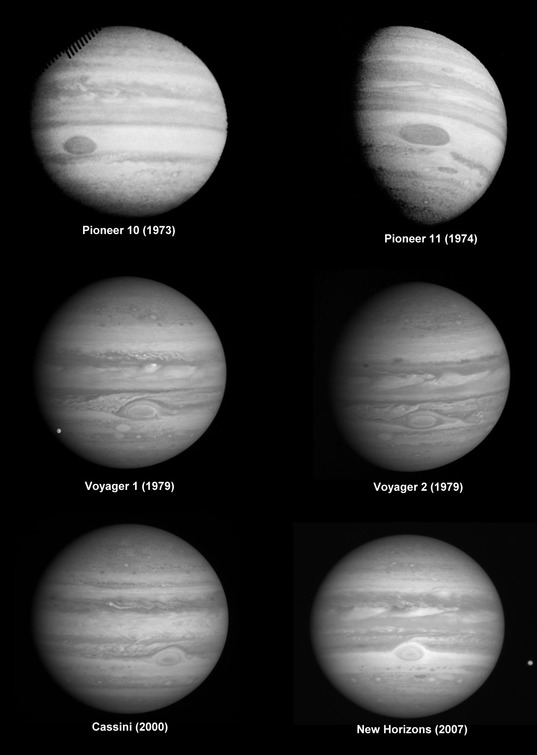 Aha! The two Pioneers passed Jupiter during a previous fade, the one that preceded the outburst in the summer of 1975. The Voyagers passed during a period of belt-like activity, when the belt disturbances had propagated into the equatorial regions. When Cassini passed in 2000, Jupiter had its iconic two-belt look. When New Horizons got there in 2007, it looked much as it had to Voyager.

Of course, Jupiter's an easy target for astronomers, so spacecraft aren't the only ones that imaged it. From an awesome database of historical photos of the planets (through 1977), here's just one photo, taken October 22, 1941, from the Observatoire de Meudon in France. No southern equatorial belt here, either! 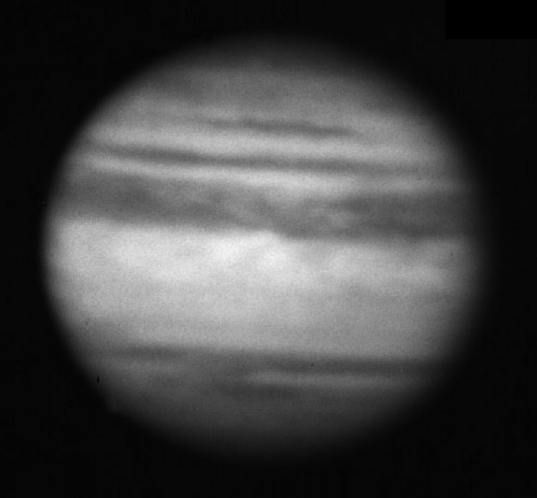 So, yes, it has certainly happened before! On to my last question: what causes it? Sanchez-Lavega told me "Apparently the aerosols and particles forming the South Equatorial Belt, which are dark at visual wavelengths, are overcome by a higher cloud deck of 'white' particles (probably ammonia ice crystals), producing in the region a zone-like aspect. It is also possible that the dark belt particles become coated by fresh ammonia frost on them." But, he added, the South Equatorial Belt isn't the only part of Jupiter that is changeable: "Certainly there are a lot of changes in the reflectivity of the belts and zones of Jupiter, linked to dynamical phenomena that we do not understand."

Jupiter's variability makes it a very rewarding target for all astronomers, professional or amateur, with big or small telescopes. It's this variability that drives amateurs like Go and Wesley to observe Jupiter night after night; now they are trying to watch for the date of that outburst that will end the "fade" period. Their observations, night after night, to watch for these sudden changes, are what ultimately produced their independent observations of whatever that bright flash was that they both saw in the South Equatorial Belt on the night of June 3.