Amigurumi: How I channeled my adrenaline while watching Hayabusa's return

Covering the events of Hayabusa's return involved a lot of watching and waiting. Rather than go blind staring at my computer and cause carpal tunnel syndrome by excessively clicking the refresh button, I decided to...go blind and develop carpal tunnel syndrome by doing some crocheting. Ahem. Maybe not the best choice of alternative activities, but it was an enjoyable way to channel my caffeinated energy. 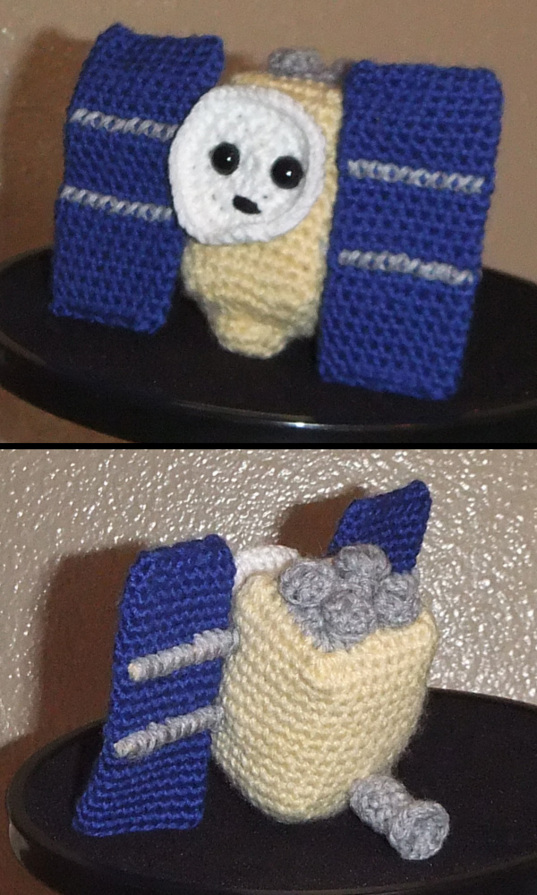 "Amigurumi" is (according to Wikipedia) the Japanese art of knitting or crocheting small stuffed animals and anthropomorphic creatures. The word is derived from a combination of the Japanese words ami, meaning crocheted or knitted, and nuigurumi, meaning stuffed doll. Emily Lakdawalla designed and crocheted this amigurumi of Hayabusa-kun (little brother Hayabusa) during the days of the spacecraft's dramatic return to Earth. It includes the four ion engines, sampling horn, sample return capsule, high-gain antenna, and solar panels.

I recently discovered amigurumi -- the Japanese craft of making little anthropomorphized stuffed crocheted creatures -- from a GeekDad post about some awesome Star Wars amigurumi. (I bought the patterns, but haven't finished any yet.)

If you'd like to make your own Hayabusa amigurumi, here's how I did it -- the below doesn't have the full detail provided in the usual crochet pattern you can buy in a store, but it should be enough for an experienced crocheter to work with. To see how I did mine, here are links to the steps I posted to TwitPic:

General instructions: amigurumi are crocheted in the round -- rather than joining rows, it's crocheted in one continuous spiral. Every stitch is a single crochet (sc).

Spacecraft bus: Use gold yarn. Make a magic ring with 6 sc. Next row: 2 sc in each. Next row: 3 sc in next sc, 1 sc in each of next 2, repeat around. Next rows, keep putting 3 sc in each corner st, otherwise sc in each sc -- your goal is to make a square. Once square is just about big enough for the base of the spacecraft, do 1 row with 5 sc in the corner stitch.

Next 2 rows: sc around except decrease 1 stitch over each corner. (You're trying to make a box shape -- this is to narrow its center to help counteract the tendency of the stuffing to make the center of the box bulge outward.) Then carry on sc around and around until the spacecraft is about as tall as the width of the base. In the next 2 rows, inc 1 st in each corner by doing 2 sc in corner st. In the next row, decrease 4 stitches in the corner stitch.

Switch to gray yarn. In next rounds, decrease 2 stitches in each corner until you have 12 stitches left. Insert the two bamboo skewers through the piece so that they run across the inside of one side of the spacecraft bus (it is much easier to put in the skewers before you stuff than after). Stuff the piece very tightly, trying to poke extra stuffing into the corners. Sc 2 sts together around, fasten off yarn leaving a bit of a tail, then use the tail to sew the final hole shut.

Ion engines (make 4): Use gray yarn. Make a magic ring with 6 sc. Next row: sc around, crocheting only into the front of the stitches (this helps curve the sides of the engines inward to make them shaped like little rockets). Fasten off. Use the yarn tails to sew the four engines in a square shape on the gray end of the spacecraft bus.

Sample horn: Use gray yarn. Make a magic ring with 6 sc. Sc around, making a skinny tube, until you think it's just about long enough (maybe a little shorter than the depth of your spacecraft bus). Last row: 2 sc in each sc. Fasten off. Use a bit of gray yarn to stuff the inside, which helps to stiffen it. Sew to the bus on the side of the spacecraft bus opposite to the side having the skewers, toward the end opposite to the engines.

Solar panels (make 2): Use blue yarn. Chain 20, join to form a ring. Sc around and around and around until you have a tube a bit longer than the spacecraft bus. Fasten off. Press flat and use the ends of the yarn to sew the tube closed so that you have a single flat rectangular piece.