The major news on the Hayabusa mission this morning is that JAXA has retrieved the sample capsule! Sadly, I don't see any photos of that event. Here are some photos of the retrieval! 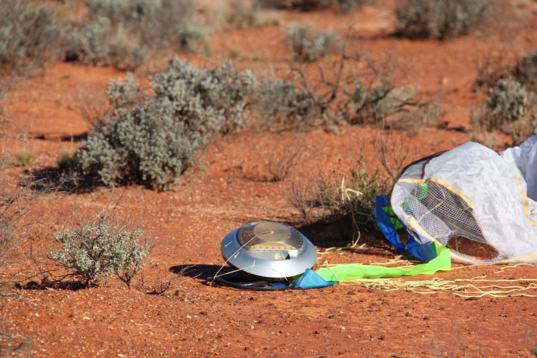 They also posted photos of the remaining two pieces of the sample capsule, which they located in the desert in the afternoon June 14: 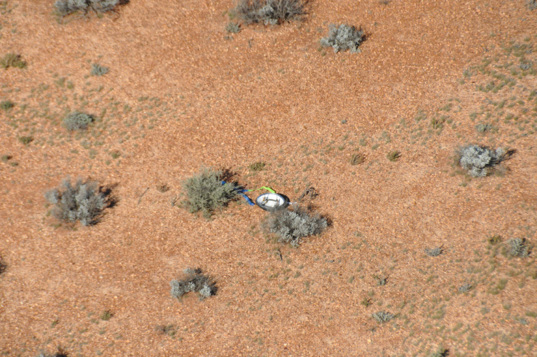 JAXA located the heat shield on June 14, 2010, the afternoon after it protected the sample capsule's entry into Earth's atmosphere.

The president of JAXA, Keiji Tachikawa, issued the following statement on Hayabusa's apparently safe return of the capsule:

Asteroid Explorer "Hayabusa" was launched from Uchinoura Space Center, Kagoshima, Japan on May 9th, 2003, and touched down on the asteroid "Itokawa" in November 2005. After obtaining the asteroid's surface material, Hayabusa left for the Earth and finally, in early morning of June 13th, 2010, entered the Earth's atmosphere along with the re-entry capsule that the spacecraft detached beforehand. The capsule successfully landed in the Woomera Prohibited Area in South Australia, and was retrieved by JAXA at approximately 4:08 p.m. (JST) on June 14th, 2010.

It is a great pleasure to see Hayabusa successfully complete the 6 billion km journey, after meeting extreme difficulties that put the spacecraft on the verge of shut down numerous times. We, JAXA, would like to express our deepest gratitude to the Government of Australia, relevant people at the Woomera Prohibited Area, and NASA for their continued cooperation on the Hayabusa project. We would also like to thank the people of Japan and the world, Japanese government, and the media for their warm support and encouragement.

Retrieved capsule will be transported to JAXA Sagamihara Campus in Kanagawa, Japan. First, the sample container will be inspected, and then the content will be extracted for analysis. We hope to find the Itokawa's surface material in the capsule, and contribute to understanding the origin and evolution of the solar system.Also, a teaser on IKAROS: They've deployed at least one of the cameras, which has apparently taken photos of the sail! They are now processing the photos for release.