There's a new "planetary gromorphology image of the month" posted at the International Association of Geomorphologists' Planetary Geomorphology Working Group page, and it's a cool post about the shapes of the river networks on Titan. As I did for their previous image of the month feature, I'm going to shamelessly copy its content, translating it from academese. The original was written by Devon Burr and her student Sarah Drummond, of the University of Tennessee, Knoxville, and Robert Jacobsen, a senior undergrad at Colorado College (cool!)

For all its alienness, Titan's surface is surprisingly similar to Earth's. Both are large, solid worlds with a substantial nitrogen-rich atmosphere; and both atmospheres contain a special substance, amounting to a few percent of the atmosphere, that is near its triple point, meaning that it can exist at the surface as a solid, liquid, and gas simultaneously. Of course, there's an important difference between Earth's and Titan's "special substances" -- ours is water, while much colder Titan's is methane. But in both cases, the special substance evaporates, accumulates in the atmosphere, and then can condense and fall to the ground where it runs off, following the local downhill gradient, into rivers and seas.

Evidence for river networks on Titan has been found by both Huygens and Cassini, particularly in Cassini's radar images. Here's the classic view from Huygens: 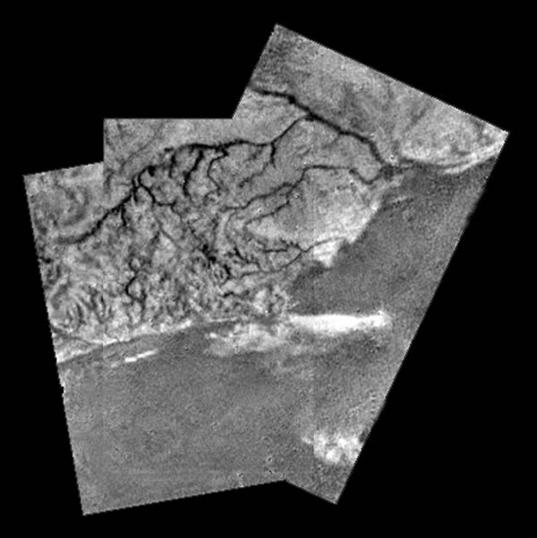 A mosaic of three frames from the Huygens Descent Imager Spectral Radiometer shows the surprising channels observed on Titan's surface during Huygens' descent.

The shapes of river networks aren't random. They go downhill, of course, and where exactly downhill lies is often a sensitive probe into what's going on underground. Earth geologists have long used the shapes of river networks to learn about the structure of subsurface rocks; the image below is from a 1967 summary of using drainage analysis to interpret subsurface geology. (These kinds of studies have been applied to Mars, too.) 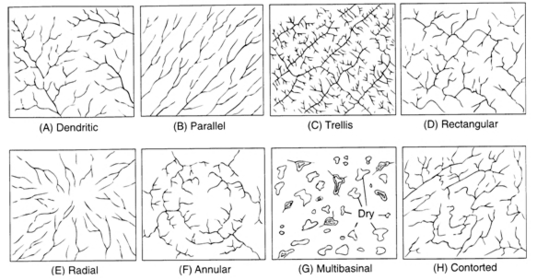 A figure from a 1967 paper on using drainage patterns to interpret subsurface geology. Three of these patterns have been observed on Titan. Dendritic are the classical shape and form where there's little structural control of the direction that rivers travel. There may be flat-lying sediments underground, or there may be very resistant, unfractured and massive (non-layered) crystalline rocks, and the regional slope is very gentle. Such networks can be seen in the T3 radar swath on Titan. Parallel drainage networks indicate moderate to steep slopes, but may also occur where there are parallel, elongate landforms, like layered rocks that have been tilted. These have been observed on the T7 and T41 radar swaths. Rectangular drainage networks indicate that the subsurface rocks are jointed and/or faulted, with sets of joints or faults intersecting at near-right angles. These have been observed on the T13 and T44 radar swaths.

Here are some examples of rectangular networks on Titan. 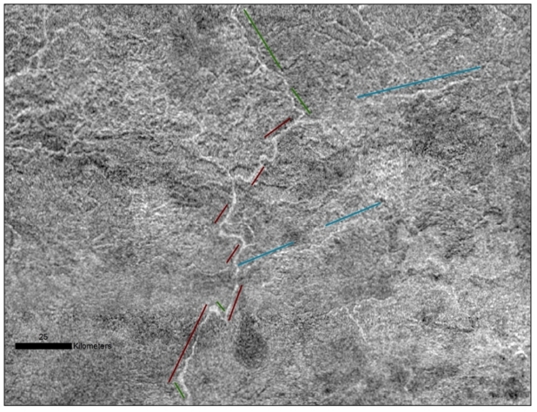 A detailed view of Titan rivers from Cassini's "T13" radar swath shows a rectangular river network. Rather than having randomly oriented branches, the river has many sub-parallel, straight segments. These suggest that underground joints or faults are controlling the direction that methane can flow across Titan's surface.

Here's a bit more of the T13 radar swath, if you'd like to hunt for more structurally controlled river segments on your own:

Here's another set, from a different part of Titan: 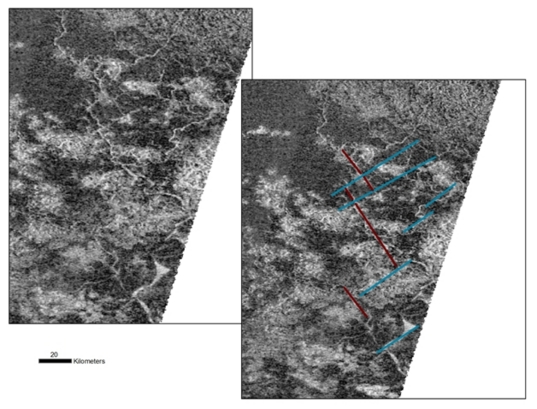 A piece of the Cassini RADAR "T59" swath across Titan shows a river network with straight segments meeting at nearly 90 degrees, suggesting that subsurface fractures control the direction of methane flow across the surface.

Rectilinear networks indicate that there are underground tectonic features like joints or faults in Titan's crust. Now, the existence of parallel joints and faults in an icy moon like Titan is not really a surprise; just look at its neighbors Rhea and Tethys, or Jupiter's moons Ganymede and Europa and you'll see icy moons are usually heavily fractured. But it's been desperately hard to see through Titan's atmosphere and its heavily modified surface materials to see firm evidence for similar fractures; the rectangular drainage patterns are really a smoking gun for subsurface fractures, suggesting that, underneath the atmosphere and the rivers and lakes and dunes, Titan really does look like those other icy moons.