Big hunks of carbonate rock on Mars at last

Carbonate rocks should be all over Mars. Mars' atmosphere is mostly carbon dioxide, and there is clear evidence for past water acting to modify its surface. If you have liquid water under an atmosphere of carbon dioxide it's actually kind of hard, chemically speaking, not to make carbonate rocks.

But it's been hard to find carbonates—surprisingly so. It's not that they're totally absent; they make up a couple of percent of the weight of Martian meteorites (usually found as crystals precipitated within fractures within the rock). And there's one spot on Mars, Nili Fossae, where spectroscopists are pretty sure that carbonate minerals crop out at the surface, but they can't tell how much of the rock the carbonates make up there. But we should really see carbonate as a major component of substantial quantities of Martian rock, and we just don't.

So it was pretty significant last week when a team of geologists working with Mars Exploration Rover Spirit data announced that Spirit had touched a rock that contained substantial amounts of carbonate minerals, 16 to 34 percent by weight. The first author of the paper, published in Science Express, was Richard Morris, but I exchanged emails with the paper's second author, Steve Ruff.

The rock was named "Comanche," and Spirit encountered it as she was descending from the summit of Husband Hill around sol 700, in December 2005. That was a long time ago, back when Spirit was still a mountain-climbing rover! 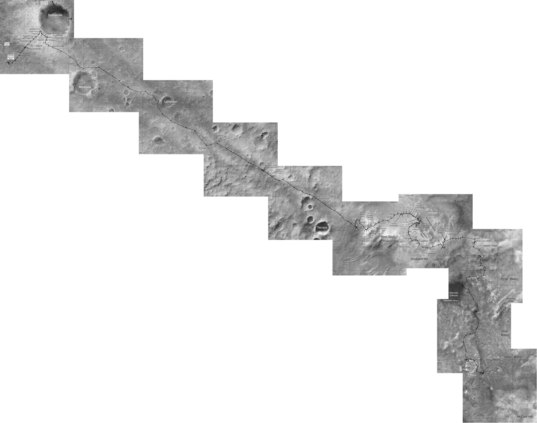 This map was assembled by planetary cartographer Phil Stooke from detailed comparisons of MOC base images to views generated from rover imagery.

Comanche and similar outcrops consisted of granular rocks that were draped over much older olivine-bearing rocks like the ones at Algonquin, in the foreground of this photo. 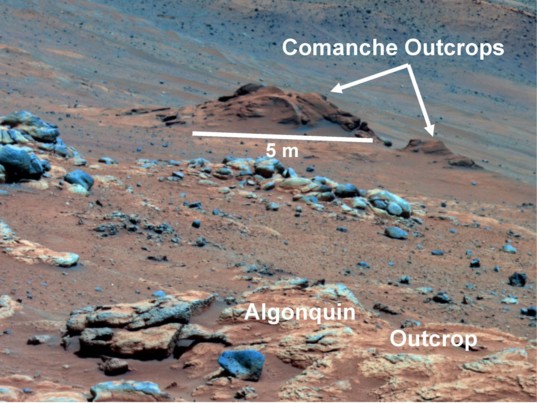 Comanche outcrop as seen by Spirit

The outcrop of rock named "Comanche" by Spirit's science team turns out to be composed, in part, of an iron-magnesium carbonate, the first massive outcrop of carbonate rock discovered on the surface of Mars. "Algonquin," in the foreground, does not contain carbonate minerals. The two outcrops are separated by about 85 meters.

According to the press release on this study, Dick Morris "suspected iron-bearing carbonate at Comanche years ago from inspection of the rock with Spirit's Mössbauer Spectrometer, which provides information about iron-containing minerals. Confirming evidence from other instruments emerged slowly. The instrument with the best capability for detecting carbonates, the Miniature Thermal Emission Spectrometer, had its mirror contaminated with dust earlier in 2005, during a wind event that also cleaned Spirit's solar panels." 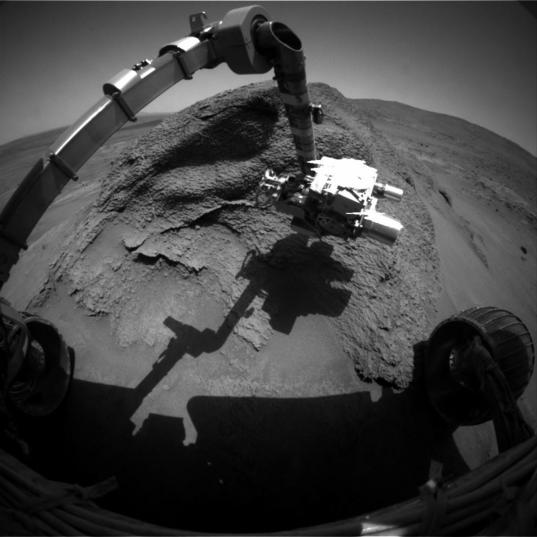 Up close and personal with Comanche

The Spirit rover touches the outcrop named Comanche on sol 698 (December 19, 2005). At the lower left of the rock, two "fins" protrude -- these are places where the rock fractured and the fractures were later filled with minerals that then proved more resistant to erosion than the original rock.

To nail down the carbonate identification, they had to do a huge amount of work to calibrate the Mini-TES data, removing the effects of the dust coating the mirror, which is one reason it took so long. (Another reason it took so long is that Spirit was, until recently, still roving; the scientists on the mission are so busy supporting the day-to-day activities of driving and exploring Mars that it leaves little time for analysis. I'm sure none of the scientists would advocate killing the rover so they can finally get some work done, but I'll bet that the Spirit scientists are not unhappy to have a break from operations and a chance to do what they went to Mars to do!)

Assuming that Morris and Ruff's work to identify the carbonate minerals was correct, what does this discovery tell us about Mars? Here's the geologic story that they tell in the Science Expresspaper, translated from academic lingo by me; any errors are, of course, mine.

Both Comanche and Home Plate show evidence of hydrothermal processes, where volcanic heating of groundwater altered preexisting minerals into new ones. At Comanche, the pH was nearly neutral, and the warm groundwater contained carbonate ions. At Home Plate, the pH was acidic, and the acid groundwater contained sulfate ions. The chemistry of Comanche's carbonate, and its association with "ultramafic" volcanic minerals like olivine and pyroxene, show a lot of similarities to the famous Martian meteorite ALH 84001. If they are similar because they formed at the same time, then the Comanche rocks are Noachian in age, which is the earliest era of Mars' geologic history. Regardless of its age, the outcrops of Comanche-like material that we see on Mars today might just be remnants of much more wide-spread deposits that formed when volcanically heated, carbonate-rich water flowed through ultramafic volcanic rocks. Then the Comanche-type rocks proved less resistant to being worn away by windblown sand and acidic groundwater than the less altered rocks, like Algonquin, so in the present day the exposures of Comanche rocks are rare.

One question that this story leaves unanswered is: where did the carbonate ions come from that were in the groundwater that turned Algonquin-type rocks with no carbonate into Comanche-type rocks with lots of carbonate? The article goes on to say that "A plausible source for carbonate-bearing solutions is, by analogy with Spitsbergen [a location with similar carbonate rocks on Earth], extension of the hydrothermal system into or through subsurface carbonate-bearing rocks where carbonate dissolution took place." To translate, the carbonate that Spirit detected didn't precipitate from a past Mars ocean sitting underneath a past Mars sky. Instead, it likely had its origin in other, older carbonate rocks, into which fluid seeped, dissolving the carbonate and then reprecipitating it at Comanche -- so we still ultimately haven't seen the original carbonate rocks that most people are pretty sure must have formed on Mars at some time, when there was liquid water active on the surface under a carbon dioxide atmosphere. Those original carbonate rocks were, Steve told me, likely (but not necessarily) somewhere stratigraphically below Comanche: "if hydrothermal fluids were involved in mobilizing and then re-precipitating carbonates, it seems more likely that the original carbonates were down section. Obviously we don't have a very good handle on this issue yet, but we just wanted to offer up one example."

I also asked Steve to offer some speculation on why these rocks are so hard to find from orbit? They say in their paper that the carbonate deposits found at Gusev are chemically similar to the ones seen from orbit at Nili Fossae, thousands of kilometers away, which suggests that deposits like these may exist across Mars. So why can't we see them? Steve said "they may be hard to spot from orbit because the exposures are small like Comanche, or dust-covered, or both. It's an interesting question (raised by many over the years) whether or how long carbonates can persist in an acidic environment. Maybe the exposures are small because they've been attacked by acids and wind over geologic history. Maybe the few percent carbonate in the global dust identified by Bandfield et al. [based on the TES instrument on Mars Global Surveyor] is the ultimate fate of Martian carbonates.