Bill Nye the Science Guy® will take the helm as the new Executive Director of the Planetary Society. Louis Friedman, co-founder and Executive Director since the organization began 30 years ago, is stepping down in September, 2010, but will remain closely involved with the non-profit space group, continuing to direct its solar sail project -- LightSail 1 -- and other Planetary Society initiatives.

"We are very excited that Bill is taking this position," said Friedman. "He will do a terrific job directing the Planetary Society into the future, and I look forward to seeing where he will lead the organization that I was privileged to serve for so long." 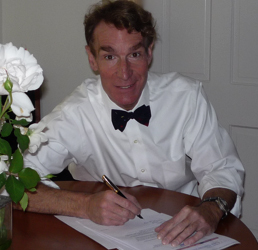 Bill Nye Signs the Principles of The Roadmap to Space

Bill Nye, currently Vice President of The Planetary Society, endorses the Principles of The Roadmap to Space. Nye will assume the reins of Executive Director in September.

A member of the Planetary Society's Board of Directors for more than a decade, Nye has been its Vice-President since 2005. Heidi Hammel, Senior Research Scientist and Co-director of Research at the Space Science Institute (Boulder, CO), will become the Society's new Vice-President after Nye assumes the role of Executive Director.

"As my astronomy professor Carl Sagan used to say, 'When you're in love, you want to tell the world,'" said Nye. "I'm a Charter Member of the Planetary Society. Now as Executive Director, I've been given the chance to share the passion, beauty, and joy of space exploration with other members and the world."

Nye credits Planetary Society co-founder Sagan with introducing him to the wonders of astronomy during a class at Cornell University, where Nye earned his degree in Mechanical Engineering.

As a scientist, engineer, comedian, author, and inventor, Nye wants to make science as entertaining and accessible as possible. His first job after college was working as an engineer at the Boeing Company. However, an early love of entertaining led him to moonlight as a stand-up comedian. Eventually, the night job became his day job when he joined Seattle's comedy show "Almost Live" as a writer and performer. That's where "Bill Nye the Science Guy®" was born.

The program, Bill Nye the Science Guy®, won 18 Emmy Awards in 5 years, 7 for Nye himself for writing, performing, and producing. He currently hosts 3 different television series: "The 100 Greatest Discoveries on the Science Channel," "The Eyes of Nye on PBS," and "Stuff Happens" on Planet Green. His next project will be "Solving for X," where he'll explain how to do algebra along with the joy of math.

Leading the world's largest space-interest organization will be a new direction for Nye, but it will also allow him to do what he loves best -- involve the public in the adventure of scientific exploration. Nye is especially interested in engaging younger generations in space science in general and the Planetary Society's programs in particular because they will provide the scientists and engineers of our future.

Jim Bell, President of the Planetary Society, said "Bill Nye has the curiosity of a scientist, the problem-solving acumen of an engineer, and the passion of an educator. He is a great choice to take over the helm of Planetary Society leadership that Lou Friedman has so capably held since our beginning."

Hammel has been a member of the Planetary Society's Board of Directors since 2005. She primarily studies outer planets and their satellites, with a focus on observational techniques. Hammel is an Interdisciplinary Scientist for the Hubble telescope's successor, the James Webb Space Telescope, which is scheduled for launch in 2011.

"Heidi is a well-respected and experienced planetary scientist and a strong advocate for public engagement in science and space exploration," said Bell. 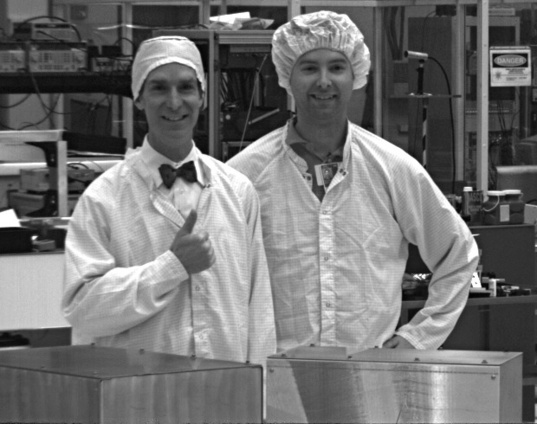 The original Pancam camera captured this image of Bill Nye (left) and Jim Bell in the clean room at NASA's Jet Propulsion Laboratory.