A NEW! Impact on Jupiter

On the same day as a team of astronomers released new Hubble Space Telescope images of last year's Jupiter impact, the original discoverer of the 2009 impact scar, Anthony Wesley, reported on an amateur astronomy forum that he had observed a new impact on Jupiter. 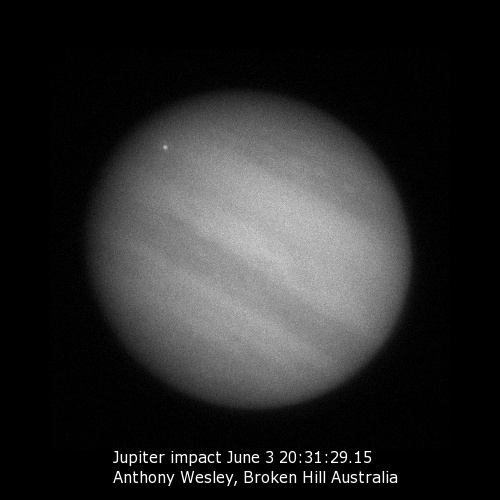 Australian amateur astronomer Anthony Wesley posted this photograph of Jupiter to the forum IceInSpace.com on June 3, 2010, upon his discovery of an impact flash on Jupiter.

Wesley posted this photograph to the forum IceInSpace.com on June 3, 2010. About it, Wesley wrote:

This is not a hoax, at approximately 20:30utc this morning I recorded a large fireball on Jupiter, it lasted a couple of seconds and was very bright.

I have it recorded on video :-) I'm at Trevor's place at the moment, using his internet, I'll put together a short video later.

This was a large fireball, but it doesn't seem to have left any mark, probably all gone in the upper atmosphere before it reached the clouds.

Wow. Unlike the previous one, Wesley said this one didn't leave a permanent mark, so it'll be tough to corroborate his report. Still -- well done, and score more points for the valuable contributions still to be made to the study of the planets by amateur astronomers!

UPDATE 16:26: Unmannedspaceflight.com member Astro0 (also Australian) posted: "I just spoke with Anthony on the phone and he tells me that the whole event lasted about two seconds from appearing to fading. Couldn't see any immediate after effects, but thought it may take until the next rotation to see anything. He is away from his normal computer set up at the moment but will be pulling together the video in the next few hours. Anthony tells me that he was recording at 60 frames per second when the event occurred, so there'll be lots of video goodness to view." Stay tuned for that! 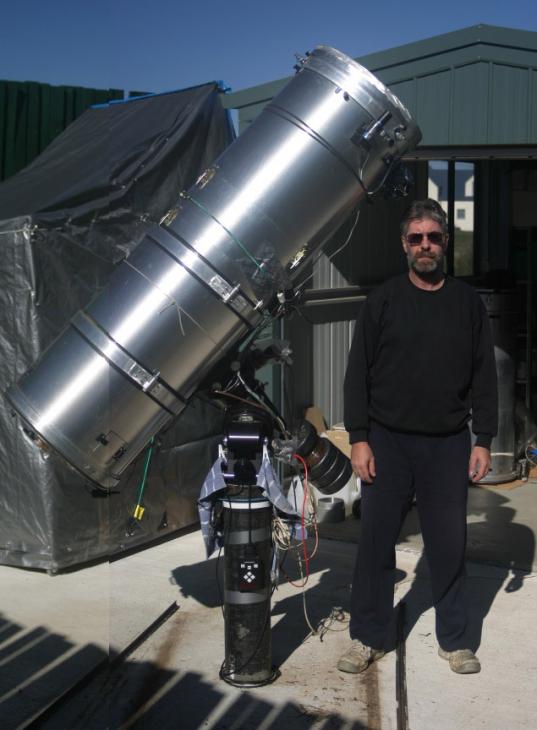 Anthony Wesley with his planet-imaging telescope