I won't pretend to be able to write knowledgeably about this dramatic moment in the development of private launch capability; instead I will direct you to Alan Boyle's Cosmic Log entry "SpaceX set for rocket roulette" and Stephen Clark's Spaceflight Now article "Falcon 9 demo launch will test more than a new rocket." Clark also maintains Spaceflight Now's Falcon 9 Mission Status Center. Jeff Foust Tweeted a lot of interesting information from the pre-launch press conference held this morning.

It's going to be a busy morning tomorrow! 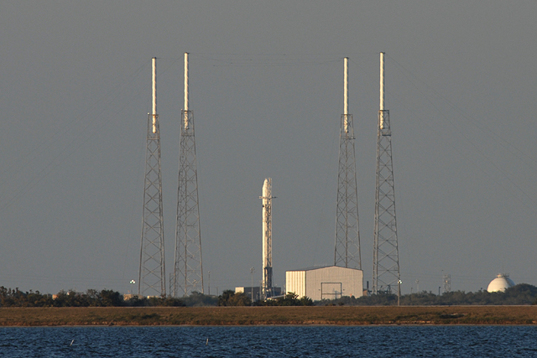 Falcon 9 poised for its first flight

The first flight-worthy Falcon 9 is ready for a pre-launch dress rehearsal and engine firing on Pad 40. Photo taken March 4, 2010.