I wrote some time ago (last August, to be precise), about the expectations for the Wide-field Infrared Survey Explorer (WISE)'s contributions to solar system science. A couple of days ago, JPL posted an image and movie documenting the progress to date. Here's the plot: 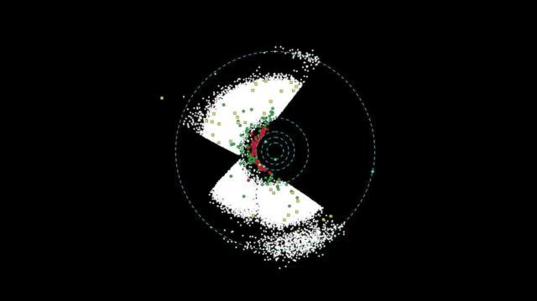 WISE's scan of 50% of the sky for asteroids and comets

This image shows asteroids observed as of May 24, 2010, by NASA's Wide-field Infrared Survey Explorer, or WISE. As WISE scans the sky from its polar orbit, more and more asteroids and comets are caught in its infrared vision. The mission had surveyed about three-fourths of the sky to date; however, data for only about 50 percent of the sky had been processed for asteroids and comets.

The white dots show asteroids observed by WISE. Most of these are in the Main Belt between Mars and Jupiter, and some, the Trojans, orbit in a ragged bunch in front of, or behind, Jupiter. The red dots represent newfound near-Earth objects, which are asteroids and comets with orbits that come relatively close to Earth's path around the sun. The green dots are previously known near-Earth objects observed by WISE. The yellow squares show all comets seen by WISE so far.

As of May 24, 2010, WISE had seen more than 60,000 asteroids. Of those, 11,000 were new! Think about that -- more than one in six of the asteroids seen in WISE images had not been noticed before by Earth-bound observers. In addition, WISE had also observed more than 70 comets, 12 of which were new, and about 200 near-Earth objects, more than 50 of which were new.

Here's the animated version of the above plot, which is cool because it shows you how the planets moved as WISE conducted its survey. It does not, I should note, show how the asteroids and comets observed by WISE moved; WISE spotted the bodies in the marked positions during its surveys and doesn't do followup. Followup on these faint objects is still needed to better determine their orbits, especially for those 11,000 new ones; it's to support work like that that The Planetary Society runs the Shoemaker NEO Grant program. The movie also gives you a sense of how WISE will cover the entire sky over the course of half an Earth year. (The plotted data is only for about a quarter of the year, as explained in the caption above.)

I had a couple of questions about the survey that Principal Investigator Ned Wright was kind enough to answer for me. First, I wondered which of the yellow squares on the plots correspond to the photos that have been released by WISE showing comets. It turns out that none of them do; both of the released photos, of Comet Garradd (shown at the bottom of this post) and Comet Siding Spring (which I posted here), were taken before the January 14 start of the formal survey (Garradd was shot on January 2, Siding Spring on January 10).

I was surprised by how many more asteroids were seen than comets -- nearly a thousand asteroids for every comet. I shouldn't have been surprised; Ned told me that "I think the large number of asteroids is normal. Comets are pretty rare. I actually feel we are finding a lot of comets, but they are all pretty small."

Finally, I'd read an article on space.com indicating that Ned's proposal for a three-month extension for the WISE mission proposed to NASA at the seemingly modest cost of $6.5 million (roughly 2% of the nominal $320 million budget) had been rejected. This extension would have been run using only two of the four infrared detectors; the other two would require hydrogen coolant that will run out at the end of the nominal mission. I asked Ned what the hit of this rejection was to solar system science (which mostly means asteroid science). He told me, "the sensitivity of warm WISE to asteroids is much worse than the sensitivity of the full WISE with all four bands. For objects at 1 AU warm WISE is 2 times worse in sensitivity and for main belt objects it is 25 times worse. You really want longer wavelengths than the 4.6 micron cutoff of warm WISE, especially as you move out from the Sun and objects get cooler." The science payoff of a WISE mission extension would be for astronomical objects observed at shorter wavelengths.

A mosaic of three separate WISE observations encompasses the full range of distances among objects observable by the spacecraft. At left is the globular cluster Messier 3 (M3). M3 was discovered in the constellation Canes Venatici by Charles Messier in 1764, and first seen to be made of stars around 1784 by William Herschel. It is about 150 light-years across and 34,000 light-years from Earth. On the right side of the image is Comet C/2008 Q3 (Garradd). At the time the comet was observed by WISE it was a distance of 419 million kilometers (2.789 AU) from Earth. But we are just catching it while it is near the Sun. The orbit calculated for Comet C/2008 Q3 (Garradd) is inclined to the plane of the Solar System by nearly 140 degrees and takes it trillions of kilometers from the Sun. It made its closest approach to the Sun in June of 2009 at a distance of 1.8 AU (270 million km), just outside the orbit of Mars. If it comes back near the Sun at all, it won't be for hundreds of thousands of years. Finally, below Garradd, is an orange streak. This is almost certainly a manmade satellite.

WISE sees invisible infrared light, and the colors here are mapped to three of the four wavelength bands observed by WISE. Blue represents light with a wavelength of 3.4 microns, cyan maps to 4.6 microns and red is light at 12 microns. The light from relatively hot objects, like stars in M3, is seen in blue and cyan. Red color represents cooler things, like dust from the comet and its tail. When this image was taken the WISE team was still calibrating the rate of the scan mirror with the motion of the WISE telescope. The rate was not yet perfected and careful examination of this image reveals some stars that are a little smeared and not exactly aligned in the blue/cyan with the red.