Using Earth to Study the Moon

Over at his "Once and Future Moon" blog, Paul Spudis has posted a very cool set of images comparing snapshots of Earth features of the ground with images created using airborne radar. Exploring Earth analogues of space landscapes is a valuable activity that can help planetary scientists correctly interpret what their instruments are telling them. Paul's current line of research is exploring the Moon using imaging radar (MiniSAR on Chandrayaan-1 and Mini-RF aboard Lunar Reconnaissance Orbiter), so his photos were from a field trip intended to familiarize members of these science teams with a few features in our geological backyard that are similar to some of the things found on the Moon.

Here, for one example, is an awesome set of photos comparing some snapshots of an unusual volcanic cone and blocky lava flow to its appearance in airborne radar. This isn't just useful for comparison to lunar features; flows like this are seen in radar images of volcanoes on Venus as well. I wish I'd been able to go on a field trip like this before working with the Magellan data! 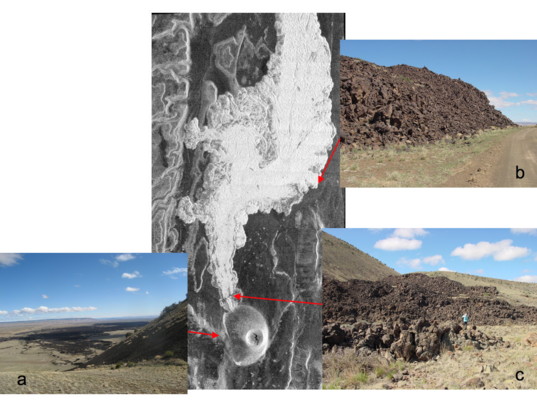 The SP cone and flow is a rough, fresh volcanic feature in northern Arizona. The radar image was captured in the L-band, with a wavelength of about 25 centimeters. The huge blocks of the lava flow have many facets that reflected the radio waves back to the transmitter, so the flow appears bright in the radar image.

Check out Paul's blog entry for a detailed explanation and more photos of interesting Earth geologic features as seen from the ground and from airborne radar. He closes with this thought-provoking comment:

The Moon has been described as a "dead planet" because compared to the Earth, which has rapid, dynamic processes of erosion, the Moon remains unchanged for millions of years. However, for its ability to retain the ancient historical record of the Earth-Moon system, advantage goes to the Moon. The multi-billion year records of impact and solar wind embedded in the lunar surface awaits our recovery, and will tell us about both the past and possible future of our home planet.