The most amazing image of Enceladus Cassini has captured yet

Every time I think Cassini has captured the coolest image of Enceladus ever, it does better.

Late in the day, several more images showed up on the Cassini raw images website from the latest Enceladus encounter. Among them were six frames captured as Cassini approached the moon from its night side, sighting across the dark southern pole to its backlit geysers. Here are four frames from that sequence. The fifth one caught something bright in the background that caused some serious pixel bleeding, so I threw it out. The sixth frame -- well, that one I'll get to in a moment.

On 18 May 2010, as Cassini approached for its 11th targeted flyby of Enceladus, it stared directly toward the little moon's active south polar geysers. This four-frame animation was taken from a distance of about 15,000 kilometers.

I could watch that animation over and over. You can see the curve of Enceladus' slightly bumpy disk at the top; those bumps spread wider over the course of the four frames, as Cassini is rapidly approaching its flyby. On the extreme right, in the first two frames, you just catch a couple of sunlit pixels at the extreme pointy end of what would be Enceladus' sunlit crescent, which is otherwise out of frame. We can clearly see three plumes, presumably from three of the four major sulci that seam Enceladus' south pole. There are some odd shadowing effects in the background that I don't quite understand. But I don't have to understand them to appreciate the awesomeness of that series.

Oh, but it gets better yet. Skipping the saturated fifth frame, we get to the sixth frame. That curve of Enceladus' dark south pole is still visible at the top of the frame, with the same bumps, just a tad wider as Cassini has gotten closer. But what has risen (or sunk, I guess) from over the horizon? Oh, it's just Saturn's rings and its largest moon Titan with its atmosphere backlit by the Sun, that's all; and the sunlit bits of atmosphere peek through the semitransparent rings here and there. OMG. 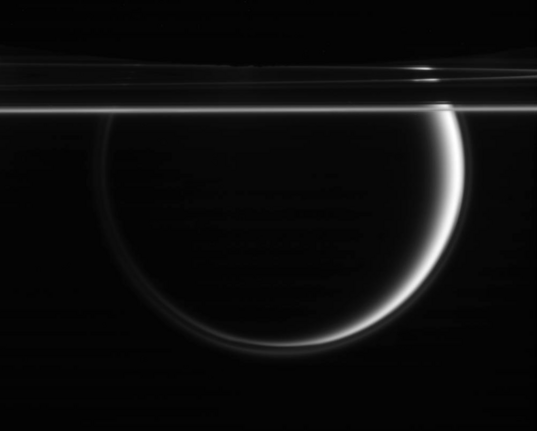 Enceladus, Titan, and the rings of Saturn

This incredible composition was captured by Cassini during its 18 May 2010 flyby of Enceladus. In the foreground, near the top, is the night side of Enceladus' south pole, only about 14,000 kilometers away from the spacecraft. In the middle ground are Saturn's rings seen nearly edge on; with the Sun nearly in front of Cassini, the wispy F ring makes the brightest, fuzzy-edged streak. In the background, peeking through the gaps in the rings, is Titan, with its twilit atmosphere nearly encircling the visible disk.

(In case you can't quite figure out what's going on in this image, here's a diagram.) 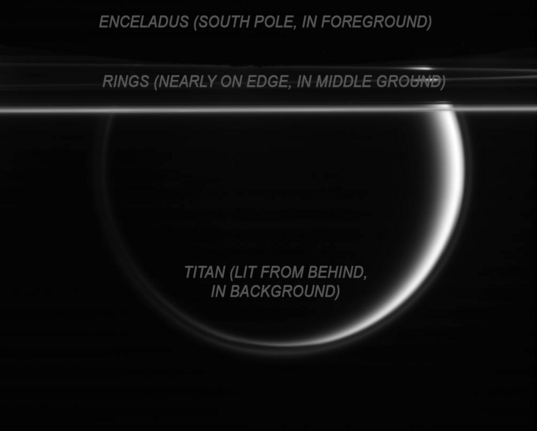 Enceladus, Titan, and the rings of Saturn (explained)

OK, still with me? Now imagine you were flying along with Cassini. This is more or less what you might have seen; the fourth frame merged with the sixth frame to create a view of Titan, and the rings of Saturn, seen through a curtain of Enceladan plumes, with the dark edge of Enceladus' disk curving above. 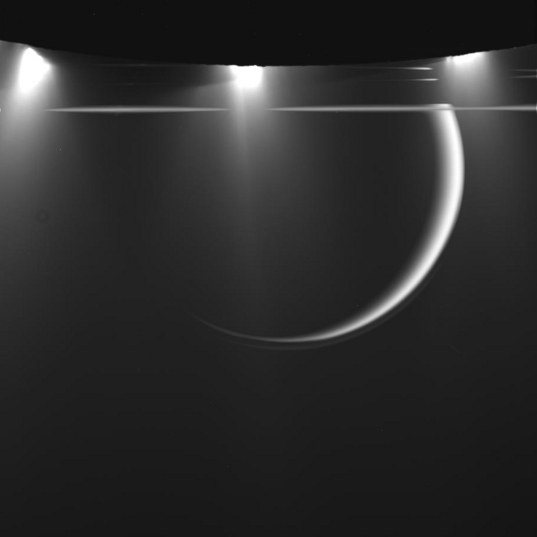 Peering through the fountains of Enceladus

Here, unmannedspaceflight.com forum member Astro0 has combined two frames captured by Cassini during its May 18 encounter with Enceladus to include both the backlit plumes and the background imagery: Titan and the rings.

Thanks to all the men and women on the Cassini team for making such awe-inspiring sights happen again and again.