A Martian Moment in Time, revisited

A good start to my day today: The New York Times' Lens Blog featured the "Martian Moment in Time" photo that Opportunity took last week in a really nice writeup. I'm so grateful, and still a little surprised, that the folks on the Mars Exploration Rover mission took this idea and ran with it!

Two worlds, one sun: while humans' lives unfolded on Earth, the Mars Exploration Rover Opportunity paused in its southward trek and captured this photomosaic. Dusty, reddish-brown sand dunes stretch to the horizon in a view taken around 15:00 local Mars time on May 2.

That's the caption submitted along with this photo to the New York Times Lens blog's A Moment in Time project, which solicited people around the world to take a photo near 15:00 UTC on May 2 to document the variety of human experience at a given moment. Humans' presence has extended across the solar system in the form of dozens of autonomous robotic spacecraft. The Mars Exploration Rover Opportunity is now more than six years into a mission originally designed only to last 90 days. It has roved more than 20 kilometers during those six years, and is in the middle of a long trek toward the largest crater it has explored yet. The trek takes it across the wind-whipped dune fields of a region on Mars called Meridiani Planum. The sands are made of grains worn from Mars' basalt volcanic rocks, so the sand is very dark. Here and there, in the troughs separating dunes, lighter-colored bedrock shows through.

The horizon is tilted because the rover was titled, paused in the act of crossing a dune; in reality, Opportunity's horizon is extremely flat. In the foreground, Opportunity's sundial is visible. The sundial, also known as the MarsDial, is both an educational project and an important component of the camera instrument; it serves as a calibration target for the camera. When Opportunity first landed on Mars, the MarsDial's face was different shades of gray, and four different color chips occupied its corners, while its gnomon (the vertical stick) was black. After six years on the Martian surface, the whole thing is covered with a layer of dust that mutes the colors.

One thing that's been nagging me since I wrote the original post is that I never explained why, despite the fact that there are dozens of active space missions, it was Opportunity that I focused on. There were two key reasons. First, since all the other "Moment in Time" pictures were going to be taken by people looking at Earth landscapes, it seemed fitting to try to get a picture from the surface of another world; and Opportunity is presently the only spacecraft that is talking to us from the surface of another world. (Her sister Spirit is probably still alive, but hibernating. Hang in there, Spirit. Tomorrow is the winter solstice, the darkest day for her.)

But the bigger reason is that Opportunity alone among all these missions is commanded on a short enough time line for her operators to decide to take such a photo only days or hours before it needed to be taken. All the other active spacecraft are orbiters, whose trajectories are mostly laid out years in advance. It is most efficient -- not to mention safest -- to plan the operations of these missions way ahead, weeks or months ahead; Cassini's incredibly complex operations planning starts out over a year ahead of the time it actually gathers data.

Opportunity is different. Although the mission does have a long-term goal in mind -- Endeavour crater -- and has sketched out a rough course, each day of operations has to be planned based on what happened the previous day. Every day of her drives across Mars, Opportunity finishes the day by gathering reconnaissance photos that document where she is. The rover drivers use these photos to figure out how to command Opportunity to do the next day's driving. Opportunity has gotten much smarter over the years, allowing her to handle some of the driving minutiae herself, but this cycle of drive -- take photos and return them to Earth -- planning -- writing commands -- sending commands to Mars -- and over again -- is how the Opportunity mission works.

So the rover team is unique among currently operating space missions in its ability to respond quickly to new ideas and new discoveries, and they were the only ones who would be able to squeeze a special photo command into the operations of their spacecraft with only days of notice. Rover driver Scott Maxwell writes about this daily cycle of decisionmaking on his "Mars and Me" blog, which chronicles the events of the rover missions as he experienced them exactly five years ago.

Of course, all those other spacecraft weren't idle on May 2 at 15:00 UTC. All of them were doing something, though for most it was just cruising; even the cruising ones, though, are usually taking some data with instruments like magnetometers and particle detectors. And there are some spacecraft that take data nearly continuously. For starters, there's all the Earth observing spacecraft. For example, here's the GOES-West and GOES-East geostationary weather satellite views of Earth at that time: 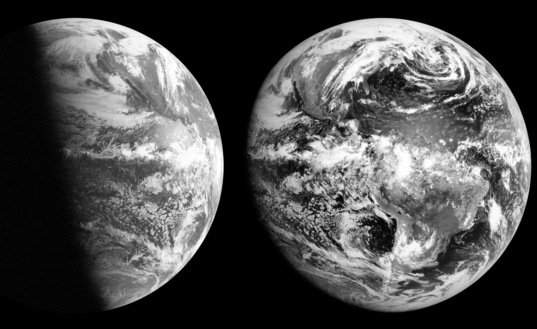 Views from the two geostationary weather satellites that monitor the Americas at 15:00 UTC on May 2.

The geostationary orbiter MTSAT, which sits over the Pacific, would have seen a completely dark Earth disk in visible wavelengths, but in thermal infrared it had a good view.

The time of 15:00 happened to catch the Terra and Aqua spacecraft right over the south pole, unfortunately. Here's what Aqua saw at 15:15, off the coast of Antarctica; Terra was on the opposite side of the continent at 14:35.

In addition to Earth weather, there are also several Sun monitoring spacecraft: SOHO, STEREO, and SDO, all of which were doing their thing at the time. Here are the twin STEREO Ahead and Behind spacecraft's views of the Sun at about 14:00. (There are images in their gallery from 15:00, but not the data for three-color views; for that I had to go to 14:00 to 14:16. The view is not much different an hour later at this resolution.) 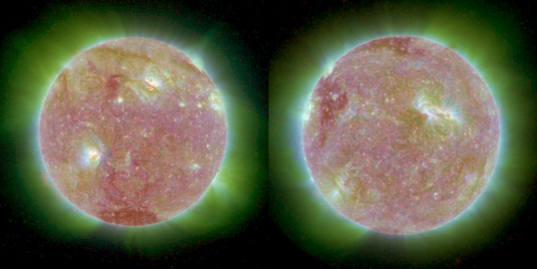 These two views of the Sun were composed from data captured by the twin STEREO spacecraft just after 14:00 UTC on May 2. They are color composites of views of the Sun at 304, 195, and 171 nanometers, all ultraviolet wavelengths, revealing the structure of the solar surface and corona.

What else was going on across the solar system? I fired off a couple of emails to find out. I asked David Seal about what Cassini was doing at the time. He told me "According to our sequence design, at 15:00 on May 2, we were doing a CAPS magnetospheric survey observation (13:47-19:47)." That is, Cassini's Plasma Spectrometer was the main instrument gathering data as Cassini cruised along in its orbit. Even while this instrument was controlling Cassini's pointing, the camera did take photos once in a while; the closest Cassini photo to 15:00 UTC was this one, a wide-angle view of the diaphanous E ring, captured, Dave told me, at 13:42. There's a lot of funny light in this image -- those are instrument artifacts that happen, I think, when the spacecraft happens to be pointing its cameras relatively close to the Sun. It's a very long exposure, as you can tell from the pixel bleeding from the bright star (I think it's a star? It could be a small moon) at the bottom of the photo.

And I asked Louise Prockter what MESSENGER was up to. Unlike Cassini, MESSENGER is not yet at its final destination; it'll arrive at Mercury in about 10 months, so is in the long and relatively quiet cruise phase of its mission. Louise got back to me to tell me "apparently MESSENGER was doing nothing (except hurtling through space and dreaming of Mercury, presumably). Later in the day we looked for Vulcanoids, but basically it was a pretty easy day for the spacecraft." As the "Moment in Time" project that got this post going was done on a Sunday morning, U.S. time, it seems fitting for some spacecraft to have been enjoying a lazy day, hanging out and daydreaming of future plans!