Jupiter has lost a belt!

Via Daniel Fischer's Tweet about a blog entry by Astro BobI learned of something which should be obvious to anyone who has trained even a rather small telescope on Jupiter over the past few weeks: one of its iconic stripes is just plain gone.

Over a period of a year, one of Jupiter's two main dark belts -- the dark stripes most visible in amateur telescopes -- faded completely away. The South Equatorial Belt (SEB) is gone, leaving just the north belt (NEB) viewable in small telescopes.

Astro Bob explains in more detail, remarking: "Jupiter with only one belt is almost like seeing Saturn when its rings are edge-on and invisible for a time -- it just doesn't look right." But, apparently, this is an event that happens rather more frequently than the Saturnian equinox, once every 3 to 15 years.

The photos above are from Anthony Wesley, the same guy who discovered the impact scar on Jupiter last year; but you don't need to be as fabulous an astrophotographer as Wesley to see this for yourself. You do, however, need to get up early; Star Walk (my iPhone astronomy app of choice) tells me Jupiter rises around 3:30 a.m. right now. If you don't feel like getting up early, just check out Wesley's website for more wonderful photos of Jupiter. 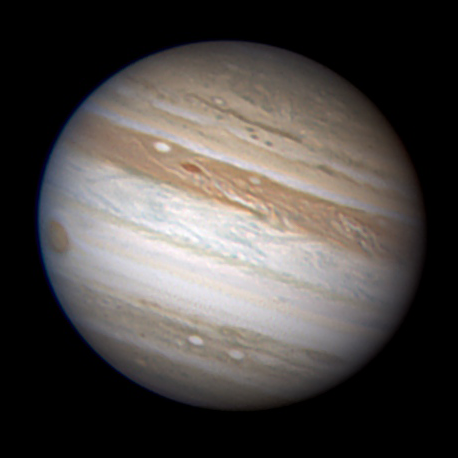 In April and May 2010, the south equatorial belt of Jupiter had faded into pinkness.