Akatsuki and IKAROS getting ready for launch, with your names aboard

I've been so focused on the dramatic return of "Mr. Hayabusa" (now fewer than 16 million kilometers away from Earth, and, incidentally, just two days away from his seventh launchday anniversary) that I've neglected to write much about two up-and-coming Japanese missions: Akatsuki and IKAROS. Akatsuki (which translates to "Dawn") has also been known as PLANET-C and Venus Climate Orbiter and is a mission to study the meteorology and climate of Venus. Once it launches on or after May 17 at 21:44:14 UTC, it will have a short cruise to Venus, entering its long, elliptical orbit in December. Its mission should last several years. IKAROS, or Interplanetary Kite-craft Accelerated by Radiation Of the Sun (ha! I just typed that from memory!) is a spacecraft whose mission will subsist only on sunlight: sunlight will provide its power and light pressure its thrust, in a demonstration of solar sailing. 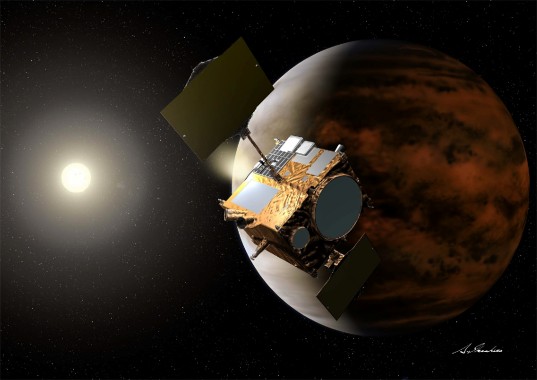 The Planetary Society gathered 34,000 people's names for inclusion on a DVD that will fly to space with IKAROS; JAXA gathered another 34,000, and we added our full membership list too. The silica glass DVD was received by the IKAROS project on April 17 and installed on the spacecraft on April 25, according to IKAROS' Twitter feed. 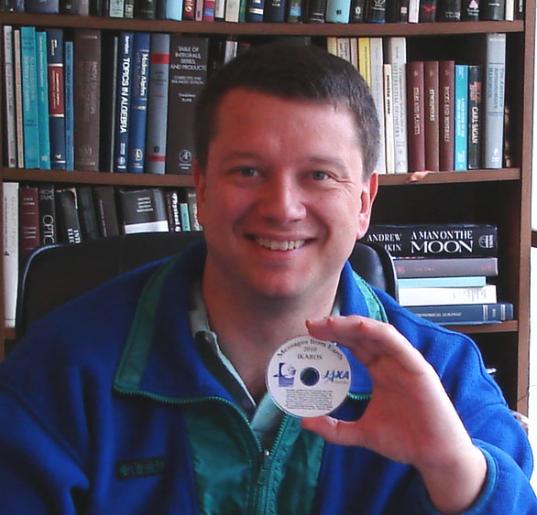 The two spacecraft met each other on April 30. IKAROS is the cylinder already stacked on the rocket at the bottom of this photo; Akatsuki is being carried over to it. The gold-foil-wrapped truncated cone below Akatsuki is an adaptor ring that allows the two spacecraft to be stacked. 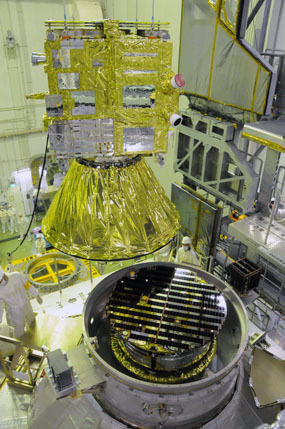 Akatsuki and IKAROS are stacked

At Tanegashima Space Center, on April 30, 2010, Akatsuki and IKAROS are stacked together on top of their HII-A rocket.

Just a couple of days ago, the stacked spacecraft were encased in a fairing that will protect them on their ride through the atmosphere.

On May 4, 2010, a large fairing is brought in to the Tanegashima Space Center to safely enclose Akatsuki and IKAROS for launch.