With the recent Lunar Reconnaissance Orbiter imaging of the Lunokhod 1 rover, scientists on the APOLLO project were finally able to do something that scientists have been dreaming of for more than three decades: shoot the rover with a laser. 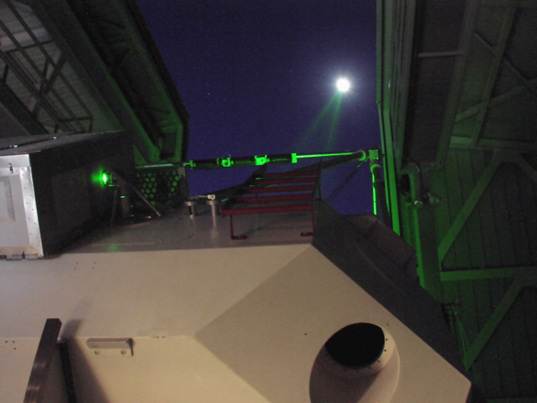 Shooting the Moon with the APOLLO laser

A green laser shoots from the Apache Point Observatory Lunar Laser-ranging Operation (APOLLO)'s facility toward the (overexposed) moon. The APOLLO project performs laser ranging to reflectors left by the Apollo astronauts and Lunokhod missions to measure the shape and rotation state of the Moon. APOLLO measures the round-trip travel time of laser pulses bounced off the lunar retroreflectors to a precision of a few picoseconds, corresponding to about one millimeter of precision in range to the moon. The photo was taken in June 2006.

First of all, I'm not speaking of the Apollo program that sent American astronauts to the surface of the Moon. I'm speaking of the Apache Point Observatory Lunar Laser-ranging Operation, or APOLLO. APOLLO is just one of several lunar laser ranging experiments that seek to measure the Moon's position in space with incredible accuracy by firing lasers at specially designed retroreflectors left on the lunar surface by past missions, and precisely timing how long it takes the reflected pulse to return to Earth. APOLLO is capable of measuring the Moon's distance from Earth to a precision of one millimeter.

That's cool, but why do it? There are several goals, but the overarching one is to test Einstein's Theory of Relativity, or, more specifically, the Equivalence Principle. This is not one of my areas of expertise so I'll just quote to you what the APOLLO website says in explanation:

Einstein's Equivalence Principle, upon which General Relativity rests, claims that all forms of mass-energy experience the same acceleration in response to an external gravitational force. This is to say that the inertial mass and gravitational mass are equivalent for any form of mass and/or energy. This is very difficult to verify for gravitational energy itself, because laboratory masses have no appreciable gravitational binding energy. One needs bodies as large as the Earth to have any measurable self-energy content. Even then, the self-energy contribution to Earth's total mass-energy is less than one part-per-billion.

If the Earth's gravitational self-energy does not precisely obey the Equivalence Principle, the orbits of the Earth and Moon around the Sun would be slightly displaced from one another (think of this as a modification of Kepler's third law), which would show up as a signal in our lunar range data. Various string-motivated theories, quintessence, and other alternatives to General Relativity almost all predict a violation of the Equivalence Principle at some subtle level. Given the recent hints that there may be some new and mysterious modification to the laws of large-scale gravitational attraction (as indicated by supernovae and cosmic background anisotropies), it is important that we probe every available aspect of the basic nature of gravity.

Lunar Laser Ranging also provides the best test of the constancy of Newton's gravitational constant, G, currently limited to a variation of less than a part in 1012 per year. Relativistic geodetic precession is also best probed (currently) by Lunar Laser Ranging, now verified at the 0.35% level of precision. And the list goes on: Lunar Laser Ranging provides the best test of the motional influence on gravitational attraction (called gravitomagnetism) at the 0.1% level, and also sets the most stringent limits on deviations from the expected 1/r2 law of gravity.It's not just relativity, though, particularly if there are more retroreflectors available. They need a minimum of three retroreflectors at three different locations to determine the Moon's orientation in space. But, as unchanging as the Moon appears, it's actually a body whose shape changes with time; more retroreflectors allow them to follow the changes in the Moon's tidal distortion. The Apollo program left three retroreflectors, at the Apollo 11, 14, and 15 landing sites. The position of the Lunokhod 2 reflector was already known, though it is in a sub-optimal orientation so it is difficult to see a reflection from it when it is sunlit. But Lunokhod 1's retroreflector had never been located with a laser-ranging experiment.

Tom Murphy, the principal investigator on APOLLO, says in a release issued today that his project had been looking for Lunokhod 1 for two years. "It turns out we were searching around a position miles from the rover," said Murphy. "We could only search one football-field-sized region at a time. The recent images from LRO, together with laser altimetry of the surface, provided coordinates within 100 meters, and then we were in business and only had to wait for time on the telescope in good observing conditions." They successfully located Lunokhod 1 on April 22, determining its precise location to within 10 meters; future work will refine this position to better than 1-centimeter precision.

Fantastic science will result. By studying how the lunar surface flexes over the course of each monthly orbit, it will be possible to study the Moon's interior -- is it liquid? -- and also to locate the center of the Moon with greater precision than previously possible. Read the press release to learn more about the project.