Titan and Dione: The same, but different

Here's a new lovely color composition of Titan and Dione captured by Cassini. This one was taken on April 20, 2010; a set of 15 raw images taken of the two moons just showed up on the Cassini raw images website. I used this one (green filter), this one (red), and this one (blue)for the composition, registering the three images according to the relative positions occupied by the two moons at the moment the green-filter image was taken. 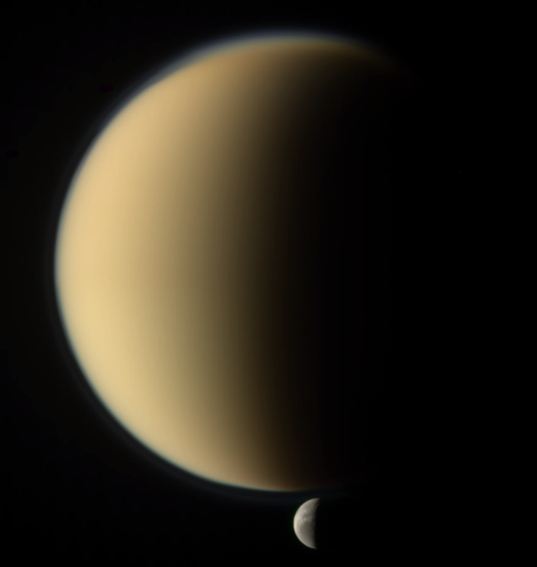 If you've been paying attention to this blog, you might notice something funny. I just posted another image of Titan and Dione last week (the one from APOD), and there was something very different about that one, namely that Dione looks like a ton bigger. Did Dione shrink? Of course it didn't. So can you explain exactly why it looks so differently sized in this image? (Scroll down and I'll tell you.)Did you figure it out? It has to do with the relative positions of Titan and Dione, and also of an invisible attendee of the party: Cassini, the photographer. Very briefly, in the first image, Dione is on the far side of Titan from Cassini, just peeking through Titan's atmosphere. In the second, Dione's in front. 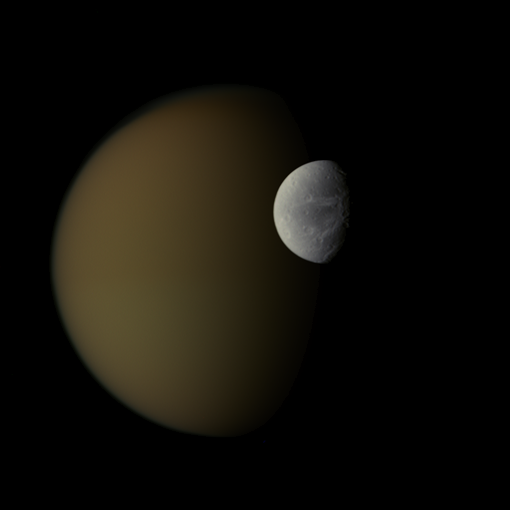 Dione passes in front of Titan in this Cassini color composite from 10 April 2010. Dione's icy surface is considerably more reflective than Titan's smoggy atmosphere. This version of the composite was composed from data archived with the Planetary Data System.

To explain in more detail, Titan (5150 kilometers in diameter) is on an orbit that it much farther away from Saturn than Dione (1120 km, or about 1/4 of Titan) is. Titan orbits at about 1.2 million kilometers, while Dione orbits at about 377,000. In the top image, taken at roughly 8:00 UTC on April 20, both Titan and Dione were on the near side of Saturn from Cassini, while Cassini was orbiting at an even greater distance. Since Dione orbits closer to Saturn, it is behind Titan (it's just peeking through Titan's atmosphere) and appears smaller than its true relative size next to Titan. In the bottom image, taken at about 1:20 UTC on April 10, Titan and Dione are on the far side of Saturn from Cassini, and since Dione orbits closer to Saturn than Cassini does, it appears a bit bigger than its true relative size to Titan. They appear much closer to their correct relative sizes, however, because Cassini was more distant from both moons during the bottom observation.

A quick explanation of how I made the image: I aligned the three frames and made a color composite for Titan, painting over some cosmic ray hits as I did so. Then I cropped out the bit of the image that included Dione, and aligned Dione's image separately; I cut out the resulting true color image of Dione and pasted it back in on the original in the position Dione occupied in the green-filter frame. I painted over the ghost Diones in the red and blue filters, then had to fix the bit of Titan's atmosphere that the red-filter image of Dione had covered. I fixed it using some atmosphere copied from the green filter image, brightened so that it matched the pixel values in the blue channel.