Volcanism across the solar system: Earth

Yesterday I asked for suggestions for topics to write about, and you readers seem to have volcanoes on your minds! As I write this, the Eyjafjallajökull volcano in Iceland is still causing havoc for airplane travel through European skies. From where I sit, in Los Angeles with no current plans to fly to Europe, it's a fascinating spectacle. Here's just one of millions of stunning photos of its activity: 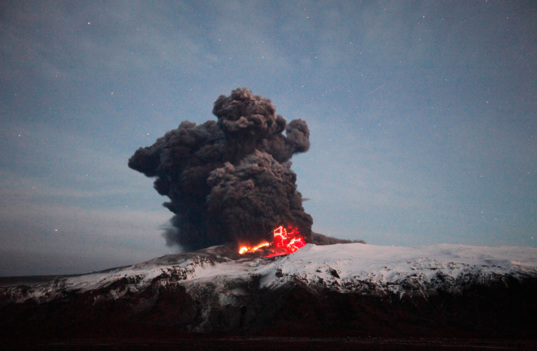 Lava and lightning light the crater of Eyjafjallajökull volcano on April 17, 2010. This is just one of numerous amazing photos of the volcano and its effects from the Boston Globe's Big Picture.

(If you have not figured out how to pronounce Eyjafjallajökull, I recommend visiting the Slate Explainer, which has a recording of "someone from the Icelandic embassy" saying it.)

So several of you asked me to write about volcanism across the solar system. This is a huge topic; indeed, it was the subject of a semester-long graduate seminar I took once. So I am going to narrow things down a bit by picking one volcanic construct on each planet/moon with active or past volcanism, and talk about the physics that underlies how volcanic activity differs from place to place.

But the place that all geology starts with is Earth. Earth is where we humans first came to understand the natural processes that shape landscapes; all planetary studies are, in a way, comparative planetology, because Earth is what we really know best. So: how does volcanism work on Earth?

Volcanic activity is when molten rock from Earth's interior erupts onto the surface, where the low temperatures cause it to freeze solid, forming interesting landscapes. (Volcanism is in contrast to plutonism, where the molten rock solidifies without ever reaching the surface.) Where does this molten rock come from? Contrary to popular belief, Earth's interior isn't filled with molten rock. The mantle -- the part of Earth's interior between the crust and core that is made of rocky material -- is solid. It's very hot, but it's solid because of the intense pressure inside Earth; like most materials, rock is more dense as a solid than as a liquid, so the high pressure makes it solid at depth.

But there's a region within the mantle about 100 to 200 kilometers below the surface where the pressure is low enough, but the rocks are hot enough, that they begin to sweat a little bit, partially melting in some places. If plate tectonics causes some of this sweaty material to be shoved closer to the surface faster than it can cool off, the melting can really get going. The density contrast between the solid (hence, more dense) parent rock and the liquid (less dense) partial melt makes the liquid want to rise, so it heads toward the surface. Often, the liquid cools and solidifies before it makes it all the way up, but sometimes, the liquid rock manages to breach the crust entirely, and that's when you get a volcano. So volcanism is often associated with upwelling within Earth's mantle, whether because of plate tectonics (that's what's happening at the mid-ocean ridges) or because of a mantle "hot spot" (which is what's happening at Hawai'i). Iceland is doubly volcanic -- it is built by a hot spot that happens to be located beneath a mid-ocean ridge. Lucky Iceland! 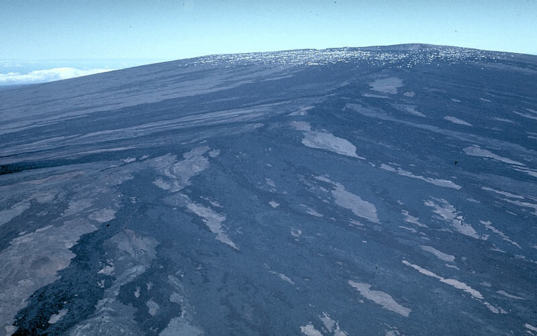 Aerial view of the northeast rift zone of Mauna Loa Volcano, Hawai'i. The rift zone is the crest of the ridge that moves from the left foreground to the right background. Volcanism occurs all along this rift. Dark lava flows spread away from the rift zone.

There are all different kinds of volcanoes and volcanic eruptions, everything from the continuously lava-oozing fissures on the flanks of Mauna Loa to the ash-blasting episodic eruptions of Mount St. Helens and Etna. The surface temperature and atmospheric pressure doesn't vary much on Earth (at least not by the standards of the temperatures of molten lava), so these different styles of eruption are driven by two main things: the elemental composition of the lava and how much gas is dissolved in it.

I'm going to try to do this volcano explainer with as few vocabulary words as possible, but there are a few I will have to introduce. When it comes to composition, the two words are: mafic and felsic. These two words describe endmembers of a compositional spectrum for volcanic rock. The word "mafic" comes from magnesium and iron (chemical symbol Fe), and refers to a rock that's got a lot of magnesium and iron in it. Nearly all of the volcanism across the solar system produces mafic rock. Mafic volcanic rock is dark-colored; basalt is a typical mafic rock. Mafic rock is dense, as rocks go. The word "felsic" comes from feldspar and silica. Felsic rocks contain much less magnesium and iron, with proportionally more sodium, aluminum, potassium, and especially silicon. Felsic rock, like rhyolite or granite, is significantly less dense than mafic rock.

Mafic and felsic are two ends of a spectrum. Mafic rocks are considered primitive; a mafic lava is what you get when you partially melt mantle rocks that have the same composition as asteroidal rock. If you take a mafic volcanic rock, bury it deep inside a planet, and then partially melt that, the lava you get is a little bit more felsic than its parent rock. It's those lighter, silica-rich materials that sweat off the rock first, you see. Repeat this process over and over and over, in cycles spanning billions of years, as has happened on Earth, and you can get lavas that are really super silica-rich.

OK, so why does it matter whether you have a mafic or a felsic lava or something in between? There are several key differences. An important one is that mafic lavas are much, much, much less viscous than felsic lavas. Mafic lavas flow like water when they're hot enough. Felsic lavas are really goopy.

On Earth, mafic lavas generally build different kinds of volcanic edifices from felsic lavas. When you have a mafic eruption of voluminous lava, the lava runs swiftly downhill, sometimes traveling many kilometers before it has a chance to harden and cool. The volcanoes that mafic lava builds have shallow slopes and may be quite broad. They're called shield volcanoes, because, in profile, they have the gently curving shape of a shield. The large volcanoes of Hawai'i are the classic examples. 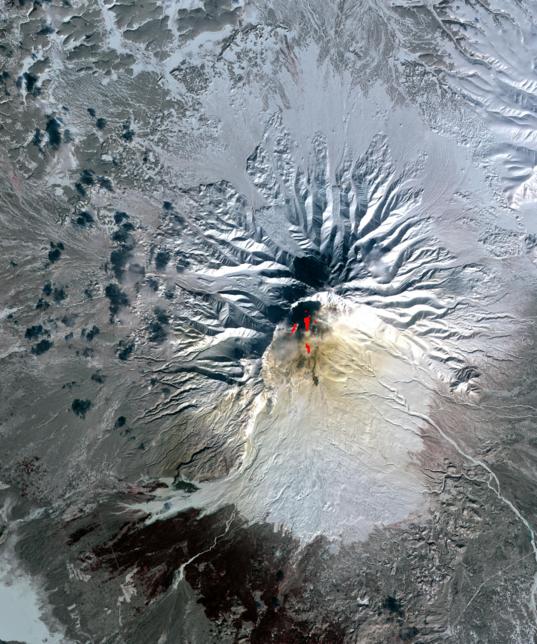 Kamchatka is a volcanically active region on the Pacific Rim. The image is from ASTER, a Japanese-built imaging spectrometer on NASA's Terra satellite. Terra is intended to monitor changing conditions on the surface of Earth. Here, it has caught the volcano Sheveluch actively erupting; red outlines indicate pixels in ASTER's thermal infrared detectors that record high temperatures associated with recent lava flows. The mountain itself has flanks covered with ash deposits from numerous previous eruptions. The image was acquired March 26, 2010 and is located at 56.6 degrees north latitude, 161.3 degrees east longitude. The image covers an area of 17.7 x 21.2 kilometers. 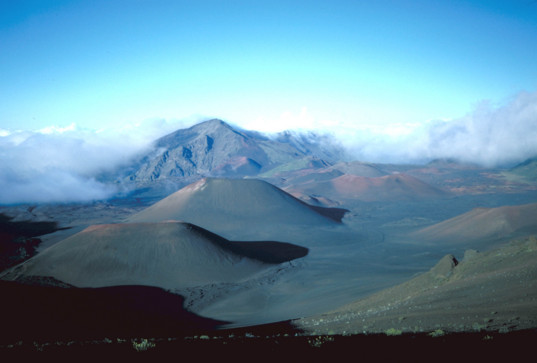 Cinder cones on the flank of the Haleakala volcano, Maui

Haleakala is a dormant volcano on the Hawai'ian island of Maui. On its flanks are numerous cinder cones, volcanic constructs built of pyroclastic material explosively ejected from a vent.

Felsic lavas are goopy and slow and don't get very far before they solidify. They tend to build stratovolcanoes (there's another vocabulary word for you), which are much steeper than shield volcanoes, forming symmetrical cones with flows radiating out from a central vent. When someone says the word "volcano" to you, you probably think of a stratovolcano; Mount Fuji, Mount Kilimanjaro, and Mount Rainier are all stratovolcanoes. Stratovolcanoes don't get as big as shields, because once they get sufficiently tall, the lava can't continue to rise. Then the volcano blows off its top or the lava finds an easier channel to the surface and you get a new stratovolcano.

So the composition and viscosity of a lava influences the shape of a volcano. Another important influence on the shape of a volcano is how much gas is dissolved in the magma. Under the great pressures of Earth's interior, there are an awful lot of gases stored within magma. I'm talking about water, sulfur dioxide, nitrous and nitric oxides, carbon dioxide, that sort of thing. In fact, we owe Earth's primordial atmosphere to the gases spewed out by volcanoes. Venus' oppressively thick atmosphere hints at a volcanically active past.

If the lava remains under high pressure until it gets close to the surface, it can produce devastatingly violent eruptions. Shake a soda can and then pop the top; the sudden change in pressure allows much of the carbon dioxide dissolved in the soda to exsolve into bubbles very quickly. The expanding gas exits the can very swiftly, carrying with it the liquid soda in a violent spray.

Exploding volcanoes are basically the same thing; the explosions are driven by the sudden exsolution of previously dissolved gases in a lava that experienced a sharp drop in pressure. The expanding gases spatter the liquid lava into the air. Once in the air, the liquid lava rapidly freezes into volcanic glass with different particle sizes. If the particles are very fine, it's called dust; if the particles are sand sized (less than 2 millimeters across), it's called ash; there can even be chunks many centimeters to meters across, which are called bombs. As those of you in Europe know, the dust and ash can be carried a long way in the atmosphere before it is deposited. And it's all sharp bits of volcanic glass, nearly as hard as steel, much harder than aluminum. Not good stuff to suck in to airplane engines.

So that's a thumbnail review of what drives volcanism on Earth. Conditions change when we go to other planets. All other volcanic places have lower gravity than Earth. Most places (except Venus) have lower atmospheric pressure than Earth; some (like Io, the Moon, and Mercury) are effectively erupting into a vacuum. The composition of the lavas varies too. How do all these variables affect what volcanoes on other worlds look like? Stay tuned and I'll tell you. Our next stop will be that poster child for planetary volcanism, Io.