A feast of pretty pictures from Cassini

Cassini has it almost too easy. Point at anything in the Saturn system and you're guaranteed of a shot that looks, at least, pretty. Of course Cassini's photos aren't random -- they're very carefully planned -- so the results are, typically, wondrous. All of the images in this post were processed by Gordan Ugarkovic.

First up, a couple of gems of shots captured late last week, mutual events of Rhea, other moons, and rings. I absolutely love the intermittent glimpses of Rhea's surface through narrow ring gaps in the first one. The second one, in color, no doubt required some of the same sorts of tricky processing I employed in the photo I posted last week. 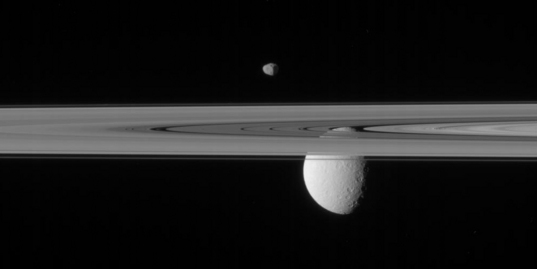 Janus, Rhea, and the rings

Rhea peeks through gaps in Saturn's rings as Janus floats above in this Cassini photo from April 8, 2010.

This next one is just a really nice, true-color, low-phase, global portrait of Titan, good for including in montages of moons. I didn't have one like this in my image library so was glad to add it. Gordan made this one from calibrated data that was released to the Planetary Data System on April 1. I need to go through the latest three-month block of imaging data and see what exciting stuff is in there -- hopefully I'll get to that this week. 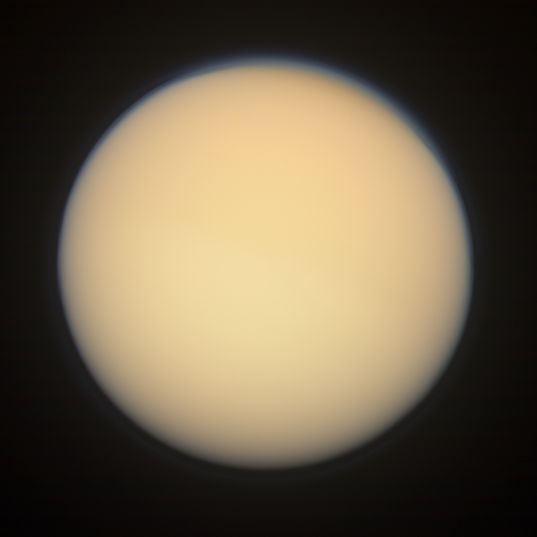 A natural color view of Titan captured by Cassini as it flew away from its "T57" flyby of the moon, on 25 June 2009. High hazes encircle the north pole.

And finally, here is a really really old one, captured by Cassini more than a year before it even entered orbit at Saturn: a telescopic view of Saturn and nearly all of its major moons. A cool find from the depths of the archives! Thanks to Gordan for digging this one up! 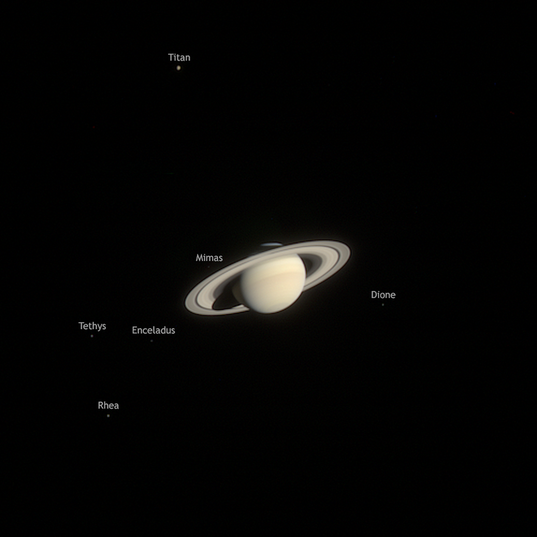 A view of Saturn captured by Cassini long before it entered orbit, on 21 October 2002, encompasses all of the planet's major moons except Hyperion and distant Iapetus. The photo has been enlarged by a factor of two.