Opportunity at Concepción from orbit

I saw this image at the Lunar and Planetary Science Conference so am happy they released it: a view of Opportunity sitting on the north rim of the little, fresh Concepción crater, taken on sol 2153 (February 13, 2010). When Matt Golombek showed this photo during a talk in which he was explaining how they determined Concepción to be the youngest crater Spirit or Opportunity has seen on Mars, he made a joke about how Opportunity is clearly superposed on the sand dunes, so is the stratigraphically youngest thing in the scene! 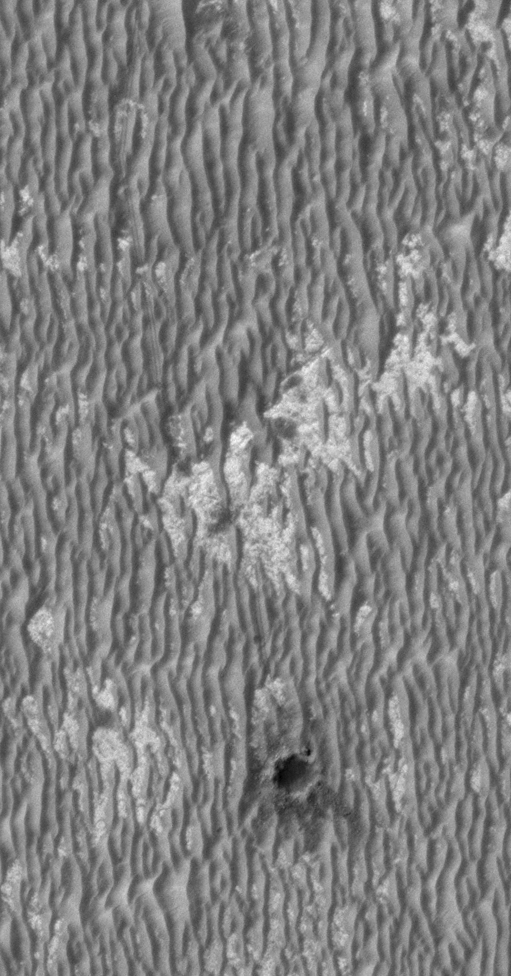 The HiRISE camera on Mars Reconnaissance Orbiter captured this view of the Opportunity rover as it sat near the edge of the small, very fresh crater Concepción on sol 2153 (February 13, 2010). Opportunity's tracks can be seen marching off to the north behind it. 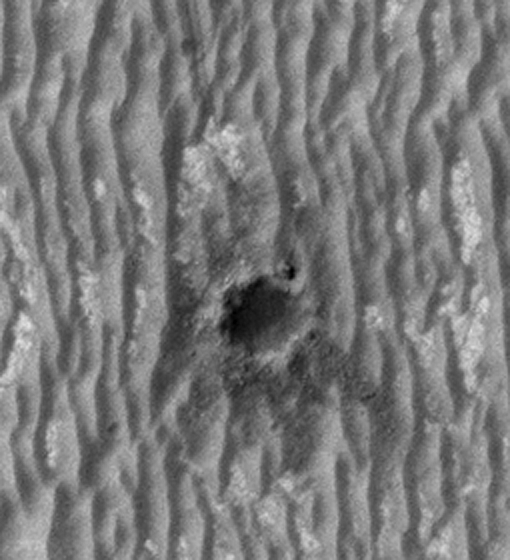 The HiRISE camera on Mars Reconnaissance Orbiter captured this view of the Opportunity rover as it sat near the edge of the small, very fresh crater Concepción on sol 2153 (February 13, 2010). This version of the image has been magnified by a factor of two and sharpened.

One interesting thing Opportunity learned during her visit to Concepción is why the rays appear dark in orbital images. It would be natural to assume that the rays appear dark because they are made of material that is darker than the dunes. In fact, the reverse is true: the dunes at Meridiani are very dark sand indeed, and the rays observed by Opportunity are actually blocks of bedrock that are much lighter than the dunes. (You can see bedrock peeking through the dunes to the left of Concepción in the images above, and note how bright it is relative to the sand.) So why do the rays look dark from orbit?

This view of Concepción crater is cropped from a panorama captured by Opportunity from sols 2138 to 2142. Concepción is the freshest crater yet visited (or indeed likely ever to be visited) by either rover. The freshness is evidenced by the blockiness of the eject and by the way the ejecta lies on top of the sand dunes. Extending outward from the crater toward the horizon on the left is a crater ray that Opportunity can now see is composed of a dense deposit of blocks. Opportunity went on to drive around this ray to examine it in more detail. In this view, the ray is pointing toward some distantly visible hills, the near (west) rim of Endeavour crater. An even more distant line of hills is behind Endeavour's rim; these are the rim of a crater named Iazu.

It's because of topography. The rays are made of sharp blocks of rock. Mars Reconnaissance Orbiter flies over the landscape in the afternoon. The blocks of rock cast dark shadows. The individual blocks and their shadows are mostly too small for HiRISE to see, so the overall effect of bright rocks mixed with dark shadows is the appearance of dark crater rays.

It just goes to show how photographs can sometimes be misleading. Even when an interpretation seems obvious -- crater rays are dark because they're made of dark material -- the truth may be quite different.

Opportunity left Concepción two weeks ago and has been making fantastic progress in further drives south. An update from JPL yesterday indicates that the six-year-old rover is still being taught new tricks; new flight software is enabling the rover to automatically choose targets of interest for imaging in the middle of drives, which should increase the science returned from these long, long traverses.

The latest route map update from Eduardo Tesheiner shows the rover is quickly approaching another interesting crater -- actually a twin crater, an overlapping pair likely made simultaneously by a meteor that split into two pieces as it descended through Mars' atmosphere. It's not nearly as fresh as Concepción, though, so I can't imagine Opportunity will hang around there as long. 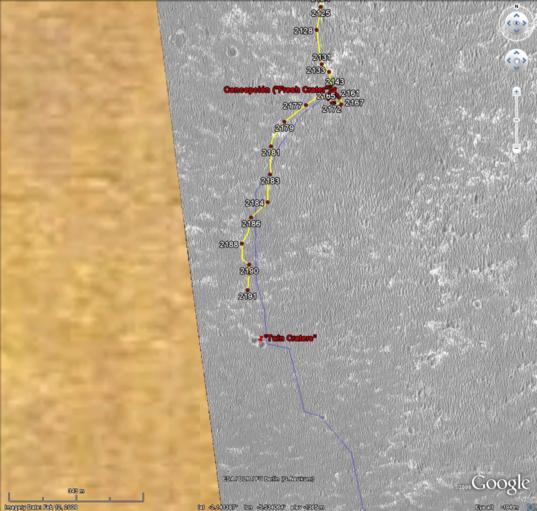 As of sol 2191 (March 23, 2010), only two weeks after departing Concepción crater, Opportunity had drawn within about 120 meters of a doublet crater. The shape of the double crater indicates that it was likely formed in a single impact event by a body that split into two pieces as it was falling through Mars' atmosphere.

It's time to put the pedal to the metal! Opportunity blew through the 20-kilometer mark on her odometer yestersol, but there's still another 12 kilometers of driving in front of her before she reaches the rim of Endeavour crater. The rover is achieving about 60 meters of distance per driving sol these days, even though her power's a bit limited by the approaching winter solstice.