The following is an update on Hayabusa posted to the JAXA website today by project manager Junichiro Kawaguchi. Hayabusa is fast approaching Earth, possibly to return a tiny sample of material from asteroid Itokawa in June. I have edited this piece fairly heavily to explain some things that were unclear; I hope I haven't added any errors in doing so. Kawaguchi's original text may be found on the JAXA website.

I can't believe that they have really managed to bring Hayabusa almost all the way back to Earth. Hang in there, peregrine falcon! You're so close to your very last, most dramatic, dive toward ground. --ESL

The current orbit information is shown in the figures below. They may need some explanation.

[Now Kawaguchi explains that they have to take great care when they shift Hayabusa's trajectory in this way, because if some problem were to happen with the spacecraft while they were in the middle of shifting the trajectory, they could wind up with Hayabusa and its sample return capsule coming in on a ballistic trajectory toward a populated area of Earth. This possibility must be avoided.] When we move to the other side of Earth, an unintended interruption of the ion engine propulsion has to be taken into account; no instantaneous trajectory shall run cross the Earth disk. So the sophisticated orbit maneuver is devised to fly over the Antarctica on the way.

Continuous ion engine propulsion lasts until the end of March, when Hayabusa will be guided to a tentative target point with respect to the Earth. It is intentionally set very far from the Earth taking guidance error into account, so that Hayabusa avoids inadvertent entry to the atmosphere.

We can control Hayabusa's orientation very well, but we are restricted in how well we can correct the orbit. Hayabusa cannot produce much thrust in the Sunward and anti-Sunward directions. So we must correct the orbit with maneuvers performed mostly in the direction tangential to Hayabusa's orbital motion around the Sun.

As of March 20th, the spacecraft's ion engines have managed to shift Hayabusa's projected closest-approach distance to Earth to a mere 46,000 kilometers. A little more thrusting will see Hayabusa's close-approach point pass within the geosynchronous orbit radius of 42,000 kilometers. 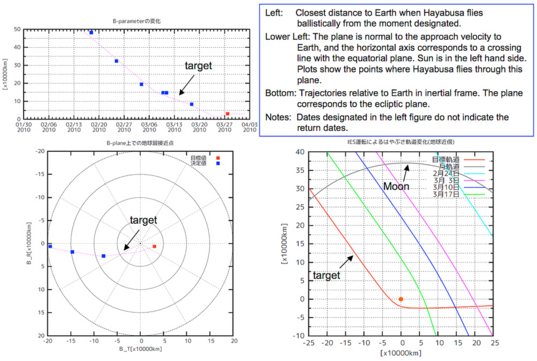 Hayabusa's trajectory as of March 23