Yes, it's yet another post on Helene! I keep on finding new stuff to post. This time it is a really cool montage assembled by Ian Regan, another one of the amateurs who hangs out on unmannedspaceflight.com. Unlike Ted Stryk and Gordan Ugarkovic, who prefer to work with calibrated, archived data to craft beautiful, realistically colored images, Ian is most interested in gleaning what he can from the raw images posted rapidly to the Internet, keeping on top of Cassini's daily activities. Here, he has taken Cassini's best views of Helene and attempted to make sense of them, matching up features from image to image. He helpfully compares them to simulated views (the wireframe spheres) generated using the PDS Rings Node's Saturn Viewer tool. 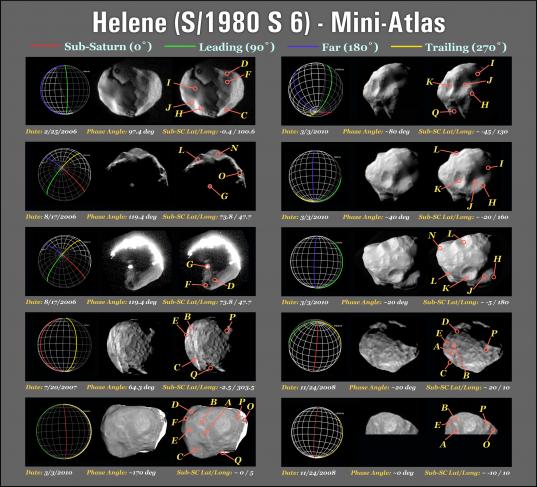 I requested that he draw on top of those wireframes colored lines indicating the locations of 0, 90, 180, and 270 degrees of longitude (red, green, blue, and yellow lines, respectively), which has finally allowed me to make sense of Helene's diversity of appearances. Helene, like all of Saturn's regular satellites except Hyperion, rotates synchronously, meaning it completes one day (one rotation) for each time it orbits Saturn. As a result, one side -- centered on the red line in those wireframes -- always faces Saturn. The opposite side -- centered on the blue line -- always faces away.

With the benefit of Ian's montage, I see that Helene is two-faced; it has two very different hemispheres. The Saturn-facing hemisphere is peppered with small impacts, little craters one to a few kilometers across (Helene is a little more than 30 kilometers in diameter). But the anti-Saturn hemisphere doesn't have that peppering of craters; there are a few, much larger craters closer to 10 kilometers across.

Why does Helene have this dichotomy? I haven't the slightest idea. The ring system is Saturnward of Helene, so maybe that peppering of impacts has something to do with the rings; I don't know. But with the benefit of this helpful montage, I can observe that that dichotomy exists, and ask for an explanation!