Despite the fact that I began my career in science doing research on Magellan images of Venus, I've often avoided Venus sessions at the Lunar and Planetary Science Conference because they've tended to be pointlessly contentious. But I decided to attend the one this year to see how things went. It was moderately interesting, but I left with a feeling of some frustration. There are untapped wonders yet to be found in the Magellan data set, for sure, but we need new spacecraft at Venus providing new types of data that we don't yet have. We need better topographic data and we need more direct peeks below the cloud deck with new spacecraft. Until that happens, Venus will be a second-class terrestrial planet, and it won't attract young geologists. (Venus Express is primarily an atmospheric mission, as is Japan's yet-to-be-launched Akatsuki. I have plenty of respect for atmospheric scientists, but I'm a geologist, and I want geology data!)

Hopefully by the time new spacecraft peek beneath surface clouds, Sasha Basilevsky, whose presentation was on thermal emission seen by Venus Express' Venus Monitoring Camera, will still be active in the field. I love Sasha; he worked closely with my graduate advisor, Jim Head, and since Sasha practically lived in the lab where I did my work, he guided my work much more than Jim did, mixing his instruction and critique with various hilarious stories from Russian space exploration (and lots of very deliberately told, heavily accented, stupid jokes). My favorite item from Sasha's presentation was when he threw up a slide containing a gnarly-looking equation describing the emissivity function for Venus' surface. About that, he remarked, "I don't understand this. Is just to show that some part of team can write beautiful equations." His analysis was on emissivity maps produced by coauthors from Venus Express data. He showed that emissivity and altitude were correlated. Terrain type is also correlated with altitude; the highly tectonized tessera terrain is generally found at higher altitudes than volcanic plains, which lies in local topographic lows. So is the correlation between emissivity and altitude caused simply by the different topographic distribution of those two major terrain types? Possibly. His presentation was inconclusive. He also attempted to look for evidence of active volcanism at Maat Mons, one of the youngest volcanic features on Venus, but found no such evidence.

Next up was Misha Kreslavsky, another former compatriot at Brown, who was (somewhat reluctantly, I think) presenting a paper by Nataliya Bondarenko on possible fresh lava flows on Venus. Misha had nothing to do with the paper -- Bondarenko was for some reason unable to come to the conference and asked Misha to give her talk in her place. Misha showed an absolutely stunning dark (hence, smooth) lava flow in Bereghinia Planitia (at 38 North, 28 East), and explained that Bondarenko's work indicated it was currently warmer than you would predict if it were an old, cooled flow. Of course I had to dig into the Magellan data to produce an image of this flow. I didn't realize until I dug into the data how large this flow is; it's approximately equivalent in scale to the Mississippi River watershed. If that all came out as part of one volcanic episode, wow. And Venus is just covered with these things. 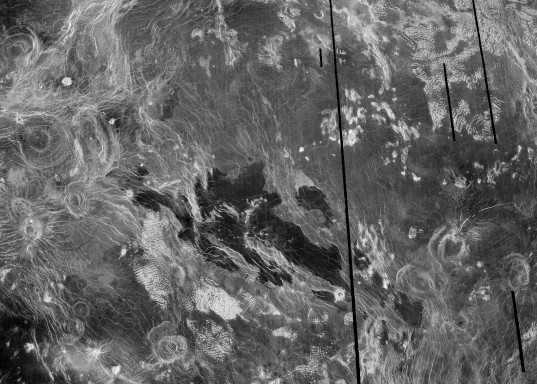 Bereghinia Planitia contains most of the types of terrain found across Venus in radar images. At the center of this image is a radar-dark (hence, smooth) lava flow, whose distribution was controlled by preexisting topography. The flow is itself deformed by numerous wrinkle ridges. Numerous circular features outlined by more wrinkle ridges are some of Venus' many "coronae," whose geologic origin is still enigmatic. The brightest terrain is the highly tectonized "tessera" material.

Next was Chris Russell talking about lightning on Venus as observed by the Venus Express Fluxgate Magnetometer. I have to say up front that I didn't quite understand the science behind his talk, but hey, lightning on Venus! He explained that evidence for lightning on Venus was first observed by the Pioneer Venus orbiter. At first it was a mystery where the lightning could be coming from, because Venus does not have low-altitude clouds that were thought necessary to produce it. Scientists postulated that the lightning must therefore be associated with active volcanism (volcanoes on Earth produce copious lightning). This didn't stand up to test, however.

Clouds on Venus are high, at 50 to 60 kilometers elevation. Like Earth clouds, they contain solid particles on which rain drops can nucleate but more importantly for lightning (I think) they can accumulate charge. "When a lightning bolt discharges a cloud," Russell said, "the transient electrical current causes an electromagnetic wave. When this spherical wave reaches the ionosphere, it slows down, and the wavefront flattens. The wave then propagates vertically." He went on to explain that this direction of wave propagation was not optimal for it being detected by Venus Express because when it is at periapse, closest to Venus, and therefore able to detect the electromagnetic waves from the lightning, it is at the pole, where the lightning-caused wave is oriented similarly to Venus' magnetic field (which is an induced one).

However, they do their best. They were helped a lot by Pioneer Venus' last few orbits, which dipped into Venus' ionosphere, allowing them to directly sample these magnetic wave phenomena. Those data were used extensively in the design of Venus Express' fluxgate magnetometer.

So Venus Express has now recorded the waveform of these lightning-induced magnetic waves. They are short-duration bursts and are 100 times larger than what we would expect in Earth's ionosphere. They are mainly seen at the lowest altitudes that Venus Express can reach, under 230 kilometers, and they fall off with Venus Express' elevation. Waves at higher altitude are weaker. It sounds like all of this is consistent with Pioneer Venus results, which is always a good thing! It's amazing how infrequent it is that a new spacecraft's higher-quality data corroborates the results derived from an earlier mission.

After this point, I left the session to catch up on writing and email and family, so I missed a presentation that I should have stayed for, by Robbie Herrick, who has a new topographic data set for Venus. The data set is derived from Magellan stereo imaging and should be far superior in resolution to the Magellan altimetric data set, if less complete (covering about 20% of the surface), so I would be excited to see it. He buttonholed me at the poster session on Tuesday, telling me how cool his data set was. I asked him if he had any plans to share it -- he said sure, but of course not until after they write a couple of papers on it! I promised to write a lengthy post on it once he could share it with the world.