I posted already some neat images from Cassini's flyby of Helene last week, and commented on how most of the images from that encounter missed Helene entirely or only caught the moon at one edge of the camera field of view. Here's an example of one of those images, which also catches Saturn's cloud tops in the background. The color is fake; I did it to help differentiate Saturn from Helene. There are other images in the sequence that can tell you the approximate true color of Saturn -- there are images through red, green, and blue filters -- but Cassini, Helene, and Saturn were all in such rapid relative motion at the time these images were taken that none of the cloud features line up from frame to subsequent frame. 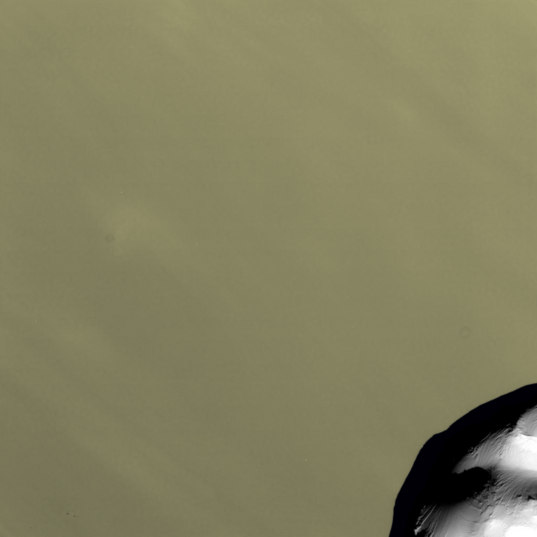 On 3 March 2010, Cassini flew within about 2,000 kilometers of Dione's co-orbital moon Helene, snapping a series of images with its narrow-angle camera. Most of those photos missed Helene entirely; toward the end of the encounter, some caught Helene in the corner of the image. In the background are the cloud tops of Saturn. This image was artificially colorized; the data is from a single green-filter image of Helene and Saturn.

(Actually, a few "features" line up very well from frame to frame, which helped me realize the locations of some artifacts within the camera. There are a couple of dust donuts, little ring shapes that result from a mote of dust within the optics that is seen incredibly out of focus, and there are a couple of odd bright splotches too. Those kinds of things are corrected for when the images are calibrated; these are raw, uncalibrated images.)

I was curious about what caused the mis-pointing at Helene, so of course I asked Cassini mission planner Dave Seal, who investigated and replied with the following explanation.

Dave said, "Until this flyby, we have never gotten very close to Helene; next closest where we imaged was about 40,000 km in July of 2007." I wrote about that encounter here. "Its libration around Dione's L4 (leading) Lagrangian point makes its orbit difficult to predict years in the future." Helene bobs around the Lagrangian point with every tiny tug from gravity and tides from Saturn, Dione, and probably Titan and even Rhea and Tethys, so its precise position must be really tough to predict.

Dave went on: "The other complicating influences are the fact that this encounter was 20 hours after a close (100-kilometer) Rhea flyby, with a Saturn periapsis [closest approach] in between. Rhea is pretty massive -- we got a 42 meter per second change in velocity from it -- and we hadn't been in Rhea's gravity well since November of 2005. Generally speaking, we know the major icy moons' positions to a [precision of a] few kilometers. Any errors from this flyby produced a 48-millimeter-per-second kick per kilometer of deviation from the expected trajectory, and we were off our predictions by 3 kilometers."

I'll explain this again in a slightly different way. Cassini just flew very close to the surface of Saturn's second largest moon, Rhea, at an altitude of only 100 kilometers; Rhea's gravity affected Cassini's trajectory. The Cassini team of course planned for the effect Rhea would have on Cassini's trajectory. However, there is uncertainty inherent in their prediction of Rhea's position. That uncertainty amounted to a few kilometers. It turned out their close-approach distance was off from their predicted path by about 3 kilometers. (About that, Dave said, "This is a modest miss that is well within the expected range of performance of the navigation team.") Now, for every 1 kilometer that their prediction was off, Cassini's velocity would be different from their prediction by about 50 millimeters per second. Their prediction was off by 3 kilometers, so Cassini's velocity after it passed by Rhea differed from expectations by about 150 millimeters per second.

Cassini encountered Helene about 20 hours after its Rhea flyby. Multiply 20 hours by 150 millimeters per second and you get Cassini's position during the Helene flyby being off by almost 11 kilometers. This is a tiny distance in the scheme of the Saturn system, but, as Dave pointed out, to me, it's a significant fraction of Helene's 30-kilometer diameter.

Dave said that there was another factor that magnified the difference between Cassini's actual and predicted positions during the close Helene flyby. "There was a periapse in between" -- when Cassini is closest to the largest, most massive, most trajectory-shifting thing in the Saturn system, namely Saturn itself, or, more precisely, Saturn's equatorial bulge. "That tends to magnify the errors (which you can't simply multiply in Newtonian-like fashion)."

Which of these factors -- uncertainty in Helene's position or Cassini's Rhea flyby altitude -- was the greater contributor? "How much of the 'miss' is from the navigation deviation, and how much of it is from Helene's position offset from our model, I can't say right now. I'm sure that analysis is being done, though."

Dave wanted to emphasize -- and I do, too -- that although it's a disappointment that the images didn't hit the target, such "misses" are not at all unexpected and in no way mean that something isn't working right on Cassini. "The scientists and the public should expect this kind of thing to happen; it wasn't, after all, a targeted flyby (we can only pick one this close, and it was Rhea)." Targeted flybys are set up with thruster firings designed to fix any navigational errors; there can't be two targeted flybys spaced so closely in time to each other, as they require human intervention to design the trajectory correction. "Clearly, we will learn about Helene's orbit from this encounter. Hopefully that will reduce the dispersions for next June's 7,000-kilometer flyby (which isn't right after any targeted encounter or a periapse)."

What about that 150-millimeter-per-second mismatch between Cassini's actual and predicted velocities? Will that propagate forward in time? Nope. Cassini regularly performs trajectory correction maneuvers, tiny thruster firings, most often near its Saturn apoapsis, that "clean up" any mismatch between its design trajectory and its actual trajectory. The design and actual trajectories are never in absolute 100% perfect alignment, but Cassini's science plans are designed to accommodate the tiny mismatches that do exist. It's only when they are pushing the envelope, as they did to try to do that high-resolution Helene imaging right after a close flyby of a much larger moon and a Saturn periapsis, that, occasionally, their observations miss. But better to attempt something hard, and only partially succeed, than not to attempt it at all, right? Cassini was there; Helene was there; it was the right thing to do to try to snap the photos. They missed this time, but in doing so they probably learned something useful (or will have learned, once their analysis is complete) that'll help them the next time a similar opportunity comes around.