This is one of the things that came out during LPSC last week and all I could do at the time was Tweet it, which doesn't serve most of my readers, I realize. So here it is in blog form: the most unbelievably spectacular 3D animation of a bit of Mars I've seen yet, produced by Adrian Lark. The flight takes us through part of Candor Chasma, one of the largest sub-canyons in the Valles Marineris complex. I've embedded it here at low definition; visit Adrian's Youtube channel to see it in all its high-definition glory. There is no vertical exaggeration. The unbelievablest (to coin a word) thing about this animation is the fact that it is generated in real time, like a video game! No overnight rendering required.

This is an amazing landscape of pyramidal hills and racetracks made of eroded, folded rocks. Wow. If you're wondering about the scale of things, Adrian says the camera is flying very roughly 100 meters above the ground at about 160 kilometers per hour, or, as Doug Ellison put it, "Think local news chopper on a car chase." (That would be a pretty low-flying chopper, but that is the appropriate vehicle for the speed involved, I think.) 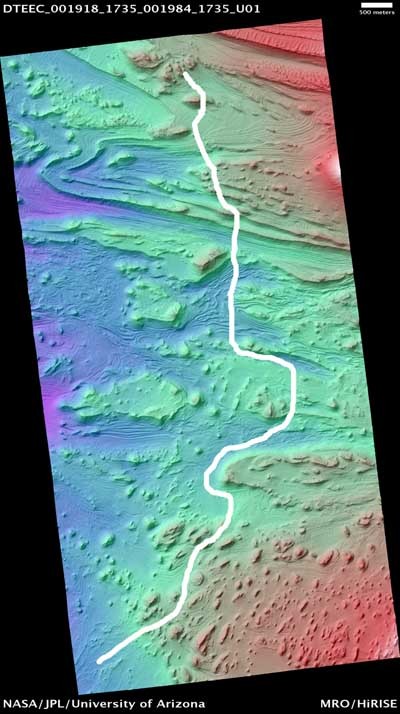 This cartoon shows, in white, the approximate flight path of the viewer through the Mars3D animation of Candor Chasma, Mars. The base map is a digital terrain model derived from HiRISE camera data, color coded by elevation: purples and blues are low, greens intermediate, and red and white high.