I was much anticipating Cassini's encounter with Helene on Wednesday. It looks like there was a problem with the pointing of the spacecraft, something that used to happen much more frequently on Cassini, but I don't see it much anymore, so that Helene falls off of the edges of many of the images. When I say "problem" I don't mean there's anything wrong with Cassini; I am sure Cassini pointed where it was told to, it's just either that there was some mistake in where it was told to point, or there is some mistake relating to the reference vector from which it measured where it was told to point, or (the most interesting possibility of all) that Helene is not quite exactly where the Cassini planners thought it was. The latter is a real possibility for Helene, whose orbit has it bobbing in a complicated fashion around a point 60 degrees ahead of the much more massive Dione. But I don't have any information as to why exactly Helene wasn't where Cassini evidently was told it should be.

In any case, some of the images did catch Helene, and they produced our best views of Helene to date. For reference, this is Cassini's previous best view of the moon, which is 36 by 32 by 30 kilometers in diameter: 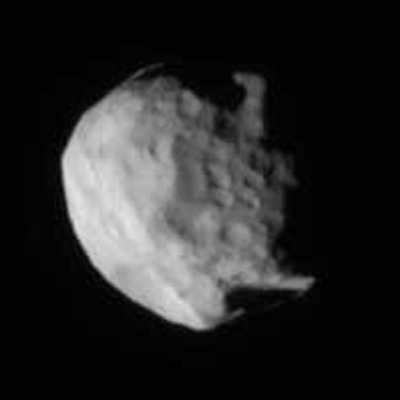 Cassini passed within 36,000 kilometers of Helene to take this image on July 20, 2007. Helene is the leading co-orbital companion to Dione and is a small, irregular body measuring approximately 36 by 32 by 30 kilometers in size. This image has been enlarged by a factor of two.

The March 3 flyby had a fortuitous geometry. Helene was positioned on the sunward side of Saturn. As a result, most of its anti-Saturn hemisphere was sunlit, while most of its sub-Saturn hemisphere was receiving bright light reflected off of Saturn's cloud tops. Cassini flew past it from sub-Saturn to anti-Saturn side, so Cassini managed to see almost all of the moon lit up. The montage below includes four of the best views posted to the raw images website. The top two were gathered on departure and show the anti-Saturn side. Helene rotates considerably between the two images, but you can line them up using the fresh circular crater as a guide. The bottom two were gathered on approach and show the sub-Saturn side. There's not much rotation between them, but the left image was cut off by the pointing problem, so I included the right one as well to show more of the little moon. 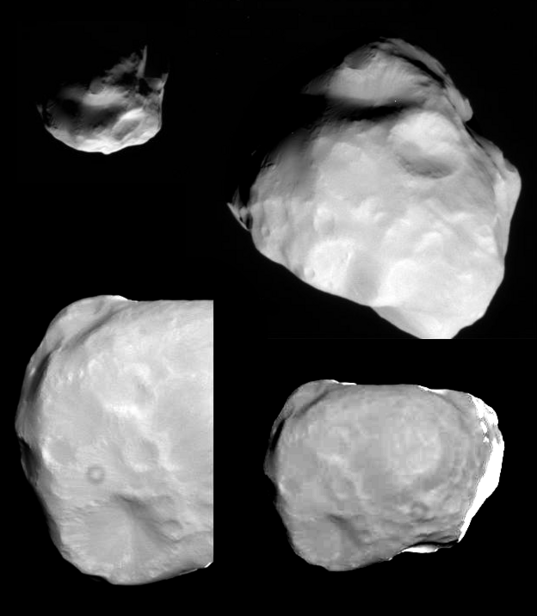 These four images of Helene, Dione's leading co-orbital satellite about 30 kilometers in diameter, were taken by Cassini during a close flyby on March 3, 2010. The top two images mostly show Helene's anti-Saturn hemisphere, while the bottom two mostly show Helene's sub-Saturn hemisphere, lit by Saturnshine. Two dark "donuts" on the bottom images are artifacts that result from dust within Cassini's optics.

The images taken near closest approach, in which Helene is sitting in the corner of Cassini's field of view, are really tantalizing. Look at all the striations here! If I am not mistaken, we are seeing evidence of avalanching, of streams of dust flowing toward local gravity lows. There also seem to be intriguing spurs of material protruding above the dustier plains. Cooooooool. 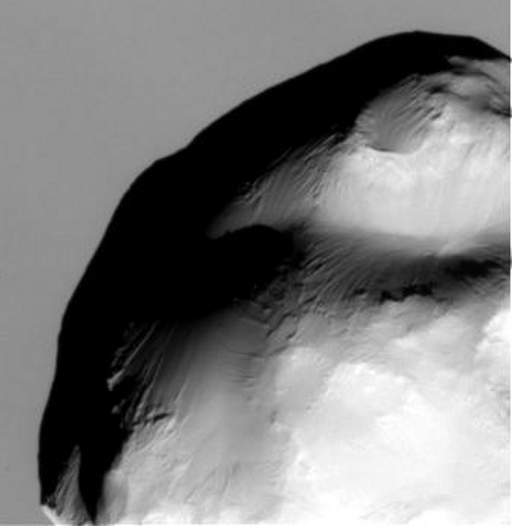 One of the images captured by Cassini near its closest-yet encounter with Helene on March 3, 2010 shows interesting geomorphology in the form of striations on the walls of its craters. This image has been enlarged slightly.