I visited the Cassini raw images site today and was pleased to see another couple of sets of images have been captured on Iapetus. Iapetus is always such a fun target. It's very far away from Saturn so Cassini never gets too close; it's always seen at a great distance, rarely under a million kilometers. But it's a big moon and it has lots of interesting surface features so even at that great distance there's plenty to explore on its surface. And because Cassini is always viewing it near apoapsis (when the spacecraft is moving slowest), and Iapetus itself orbits slowly, the images are always very easy to stack into color composites; Cassini's perspective is very stable, and there's basically no rotation of the moon from frame to frame within one observation.

So here's my effort on one of the two sets of Iapetus images released today: 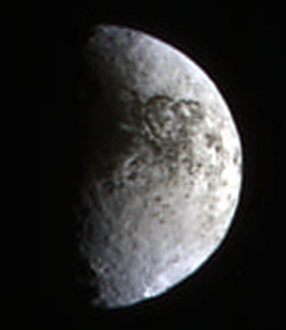 Cassini was approximately 1.7 million kilometers away from Iapetus on 18 February 2010, when it snapped the photos used to compose this false-color view of the moon.

With Iapetus in half phase, the terminator (day-night boundary) is closely aligned with the boundary between Iapetus' light and dark terrain. That boundary becomes complex near Iapetus' equator, where dark material wraps around onto the trailing hemisphere in a set of overlapping circles (probable ancient impact scars) that are often referred to -- at least among the amateur community anyway -- as "the snowman" on Iapetus.

The image is composed of eleven separate Cassini frames: four through clear filters, four through green filters, two through infrared filters, and one through an ultraviolet filter. All of the images were enlarged 400%, aligned, and then stacked (this sharpens the image and helps to eliminate the artifacts from their JPEG compression). An unsharp mask was applied to bring out details in the stacked image. Then the green images were stacked separately, as were the infrared images. The stacked green and infrared images were merged with the single ultraviolet frame into an RGB color composite. This composite was converted to Lab format, and the sharpened, stacked image swapped in for the brightness channel in the Lab-format image. The resulting image was reduced in resolution by a factor of two, producing a final image a factor of two larger than the original data.