Here's a neat picture from Opportunity, a panorama composed of its wide-angle, mast-mounted Navcam cameras, showing the crater Concepcion. In this one I particularly like the parallel slices cut through a low dune by Oppy's wheels as she cut over to begin her clockwise circumnavigation of the crater. In front of her are the three cubic ejecta blocks named "Chocolate Hills."

On sol 2,147 (6 February 2010), Opportunity had shifted around the small, fresh crater named Concepcion to check out some of its ejecta blocks.

Opportunity captured a color view of the rocks from this position. There's a bit of a rind on the leftmost block, which might have been some mineral filling a fracture in the rock before the crater formed. In color, that rind is very clearly revealed to be a map of North and Central America, including Baja California, with a little less distinct mappery of part of Europe, perhaps even Australasia to the right. The martian cartographers need to go study that part of Earth a bit more. (At least that's what I see -- what do you see?) 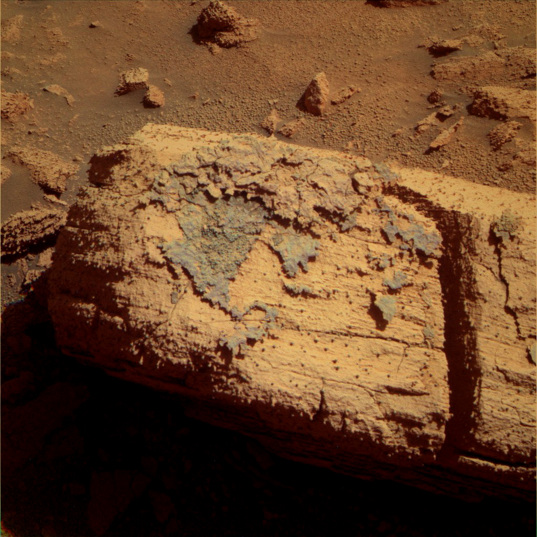