Doug Ellison has been playing with Martian digital terrain models recently, to great effect. Here is a marvelous animation he produced that flies you over the Pathfinder landing site, out of -- and back into -- its own camera view of the terrain. It's surprising how deep the big crater south of the Pathfinder landing site actually is; it's quite a bit closer to the original bowl shape of the crater than most Martian craters I've seen in previous 3D views. (Martian craters are commonly modified by being filled with sedimentary, volcanic, or wind-deposited material.) I've embedded it here at its lowest resolution, but you can view it in HD -- it's pretty amazing.

An animation over the Mars Pathfinder landing site in Ares Valles created using HiRISE digital elevation model (DEM) data. The terrain has accurate vertical scaling and is not exaggerated. The Mars Pathfinder 'Presedential' Panorama is used to show the local terrain in context. A black marker-post marks the landing site during the fly-around.

You should be astonished, very astonished, at how spectacularly well the Pathfinder view of the landing site (two-dimensional images shot from a camera sitting very near the surface) matches with the computer-generated 3D landscape. How was this done?

It began with something called a digital terrain model (DTM), also referred to a digital elevation model (DEM). (If there is any distinction between these two terms, I don't know what it is.) A digital elevation model is essentially a digital image like any other, except that the pixel values encode altitude rather than brightness. High pixel values equate to high elevations, low pixel values equate to low elevations. So if you color a DEM the same way that you color a photograph, dark stuff is low, and bright stuff is high. Here's the DEM that Doug used for the Pathfinder landing site, colored in that way. Big Crater is a great big hole, so its bottom is black; the Twin Peaks and North Knob are the local highs, so are white. Everything else is intermediate gray depending on its elevation. 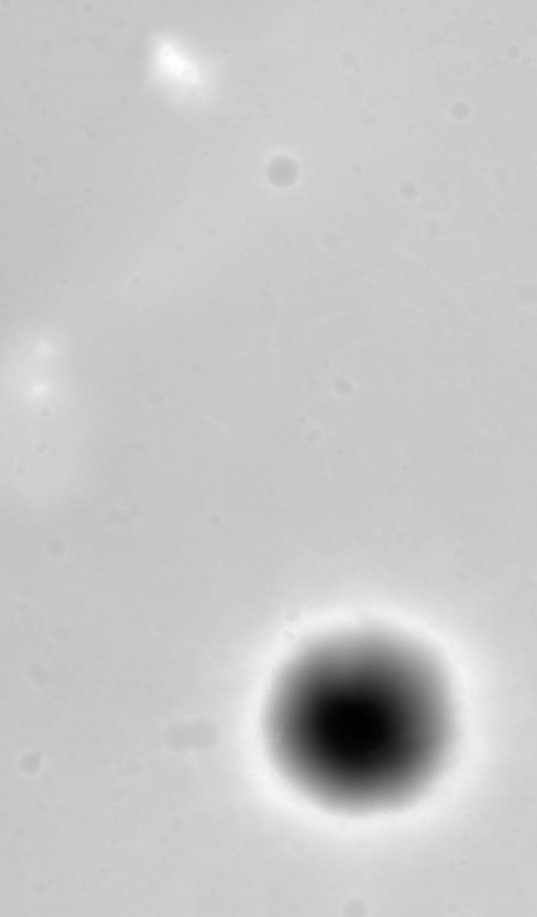 This digital elevation model of the Pathfinder landing site was derived from stereo HiRISE images.

But where did this fantastic DEM come from? It came from comparison of two Mars Reconnaissance Orbiter HiRISE views of the Pathfinder landing site taken from slightly different points of view. (You can see those two images for yourself here and here.) Advanced stereo-matching algorithms can automatically match features between the two images, and determine their relative elevations based upon how much they shift with the spacecraft's shifted perspective. It is computationally very, very intensive work, not within the reach of home computers. But the algorithms are getting very, very good at producing these things automatically.

Doug had help creating this DEM from Peter Grindrod, a researcher at University College London; but the HiRISE team is now releasing digital terrain models that they produce in-house, so that anybody with 3D rendering software and some skill (and a lot of patience) can have a go at creating the sort of animation that Doug produced here. Personally, I have neither the software nor the requisite patience, to say nothing of Doug's skill! So it's fortunate for me that he has filled his YouTube channel with a kajillion more amazing animations created from HiRISE DEMs, in which he is careful to preserve the accurate vertical scaling (no vertical exaggeration here). Make sure to look at them in HD -- there is plenty of detail to spare. Here's another favorite of mine, showing fantastic knobbly texture and scarps within Athabasca Valles.