A pretty picture of Concepcion crater

It looks like the rover team thinks Concepcion is pretty enough (in both aesthetic and a scientific senses) to be worthy of the full-color Pancam panorama treatment; color frames started arriving on Earth over the weekend. Here is just the beginning of the Concepcion panorama, which will be really lovely when it's done:

Half of Concepcion crater

On sol 2,140 (30 January 2010), Opportunity had roved to the edge of a very fresh crater named Concepcion and begun to gather the images necessary for a full-color panorama. This part of the panorama includes half of Concepcion with its blocky ejecta. On the horizon are the hills formed by the raised rims of two distant craters, Endeavour (Opportunity's goal, still about ten kilometers away) and Iazu.

There will be two great things about this panorama: the little crater with its rays, and the view on the horizon. There are distant, hazy hills out there, and some of them are on Endeavour crater, Opportunity's eventual goal. Here's a map put together by James Canvin that shows how some of the mountains are on the near rim of the crater, while others are on the far rim, and others belong to another crater entirely, Iazu. Watching these hills grow is going to be a really exciting component of Opportunity's continuing drive south. 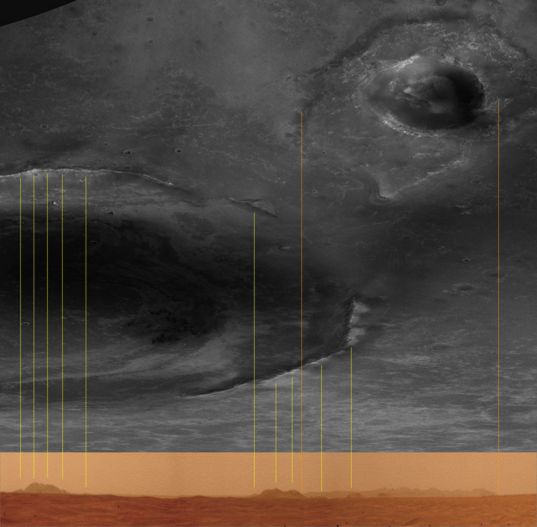 An orbital view of Opportunity's road ahead has been rotated to match the orientation of Opportunity's horizon view on sol 2,140 (30 January 2010). The view of the horizon has been stretched vertically to exaggerate the topography. There are numerous rows of hills on the horizon, representing different portions of craters. The center set of hills is associated with the near rim of Endeavour. The leftmost set of hills is the far rim of Endeavour, and the right-side hills are the rim of another crater, Iazu.