Since leaving Marquette Island on sol 2,122, Opportunity has been barreling southward on her journey toward Endeavour crater. On her horizon for the last several sols has been a very small but very fresh looking crater named Concepción. Here's how it looked after Tuesday's drive, sol 2,136: 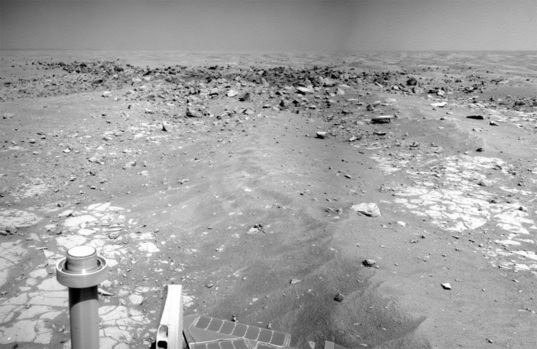 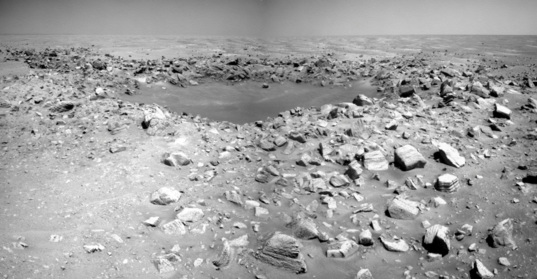 On sol 2138 (January 28, 2010), Opportunity had approached the small, fresh crater Concepcion close enough to peer into its dust-filled interior.

How do I know the crater is "fresh?" The ejecta -- that's the term for the rocks that were thrown out of the excavated crater by the force of the impact -- is very very blocky and is mostly resting on top of the surrounding soil. There's certainly no evidence that the sand ripples have marched over the blocks, so the crater formed since the time that the Meridiani dunes have last moved. However, it didn't form yesterday, or its center wouldn't be filled with dust.

But how old is "fresh?" A recent update on the JPL website said that Concepción is thought to be 1,000 years old. Which immediately makes you wonder -- how did they figure that out? Opportunity has no tools that could figure out the age of a rock from a distance, or, for that matter, in situ. Radiometric age dating is, sadly, something that cannot be done at all (yet) from a spacecraft. So how do we know this thing is 1,000 years old?

I had no idea, but Matt Golombek was kind enough to explain things to me. In an abstract that he and several coauthors will be presenting at this year's Lunar and Planetary Science Conference (here, in PDF format), he explains the process by which they arrived at the age of a different set of craters visited by Opportunity, the so-called "Resolution" cluster. This included craters referred to as Resolution, Adventure, Discovery, and Granbee, which Opportunity visited from sols 1,818 to 1,854. They used three different methods to estimate when the ripples in Meridiani last moved to be approximately 100,000 years ago; and the Resolution cluster is superposed on the ripples with no evidence of being deformed by ripple motion, so it's younger than 100,000 years old. 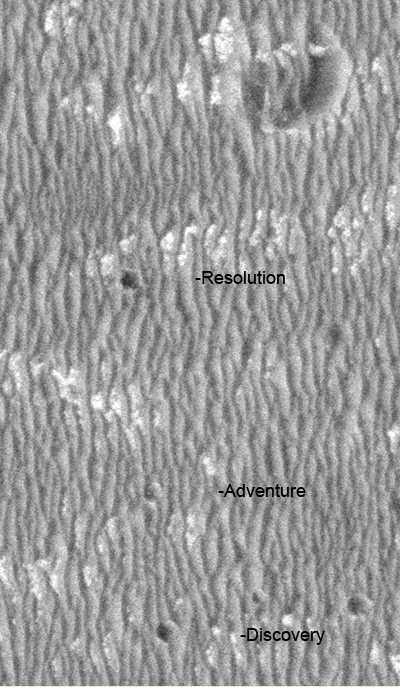 The Resolution cluster of craters

A view from Mars Reconnaissance Orbiter HiRISE down onto the Resolution cluster of craters, which opportunity explored from sols 1820 to 1857. These craters' rays have vanished but the craters themselves are not covered by dunes (unlike the larger crater near the top of this image) so are probably old but not as old as the time when the dunes last moved, estimated to be around 100,000 years ago. The image covers an area 100 meters wide.

Matt told me in an email that the Resolution cluster "has no rays, which have been found for the very youngest craters that have impacted in Meridiani (and elsewhere). The Concepción crater has what look like degraded dark rays in HiRISE images, so we would say it is younger than the Resolution cluster, but not as young as other very fresh impacts in Meridiani that have both bright and dark rays." 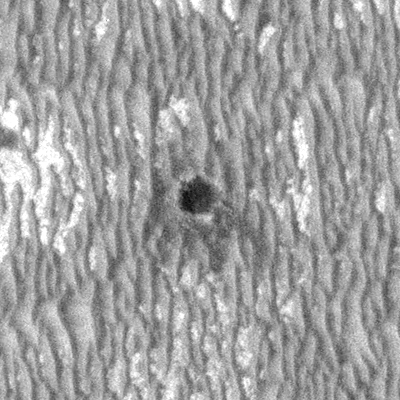 Concepcion crater is relatively fresh, because it still retains dark rays superimposed upon the Meridiani dunes. However, it is not as fresh as some craters in Meridiani, because it lacks bright rays. It is estimated to be roughly 1,000 years old. Opportunity approached it on sol 2,138. The image covers an area 100 meters square.

These very fresh, bright-and-dark-rayed impacts have not been visited by Opportunity. You can perform statistical analyses to arrive at an age estimate for them of some decades old. Concepción's morphology -- having degraded rays -- places it intermediate in time between the Resolution cluster and these other very fresh craters, or between several decades and about 100,000 years old. A thousand years is a hundred times older than a decade and a hundred times younger than 100,000 years -- thus the age estimate for Concepción of about 1,000 years old. It's not exactly a definite age -- Matt told me "all of these ages should be considered as nothing more than educated guesses, but they do provide some constraints."

If absolute age dates are inexact, relative ones aren't. We can use superposing relations of crater ejecta blankets, dune motion, river channel carving, volcanic eruptions, et cetera to determine a very detailed relative sequence of when things happened on Mars, or any other solid-surfaced world -- this flow happened before that crater, which happened before these dunes marched across, and so on. Our estimates of the exact ages of things may change over time as we get better data, but those changes won't (usually) affect our understanding of the relative timing of the events that shaped Mars' surface.