Mars and a moonbow

As one of my fellow space bloggers is wont to say: Holy Haleakala! This photo is spectacular! [EDIT: It would be spectacular at higher resolution, but permission has been withdrawn to post it at high resolution until it after it's published -- sorry folks.] 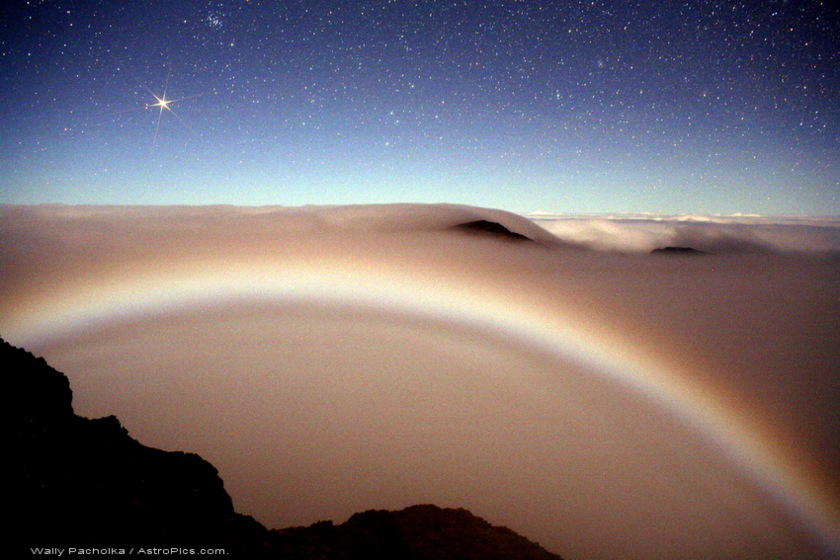 Mars rising over moonbow in Haleakala Crater in Maui

There are several amazing things going on in this photo, which was taken last night, January 20, 2010. First of all, it is, in fact, Haleakala, the crater at the top of Maui's highest volcano-built peak, reaching more than 3,000 meters (10,000 feet) above sea level. But the crater itself is shrouded in clouds. Fortunately, the photographer, Wally Pacholka of astropics.com, was standing above those clouds, able to see Mars shining brilliantly in a star-studded sky. Behind Pacholka was a four-day-old crescent moon. And the light from that moon was refracted and reflected within the droplets in the cloud filling Haleakala to make a moonbow. Moonbows represent the same phenomenon as rainbows, it's just that the light from the Sun has reflected off of the Moon first before it's separated into its colors by the myriad tiny water droplets in the cloud. They're usually spotted in places where you can reliably find water droplets when there's a clear sky, like near waterfalls. But Pacholka tells me it's really rare to see them when the Moon is so young (and hence, dim); most moonbows are observed when the Moon is closer to full. Seen with the naked eye, moonbows usually appear white, because they're too faint to excite the color-sensing cones in our eyes, but in long-exposure photographs like this one, the colors become apparent. Mars' presence in the sky above is just icing on the cake.

Gorgeous. Pacholka was there at the invitation of Maui no ka oi (best of Maui) Magazine, shooting for a May/June 2009 article on the magnificent night skies on this volcanic crater in the middle of the Pacific Ocean.