The United States Geological Survey has just released a new atlas of Mercury, the first to be based upon the three flybys worth of image data gathered by the MESSENGER mission. Past published atlases of Mercury have only shown the half of the planet that was imaged by Mariner 10; now the global map is almost complete. Some of you might be wondering, if MESSENGER was able to map almost all of Mercury in its three flybys, why does there need to be an orbital mission? The answer to that question, apart from the fact that imaging isn't MESSENGER's only goal, has to do with the uneven lighting conditions under which MESSENGER imaged Mercury. First, take a look at one of the fifteen sheets in the new atlas: 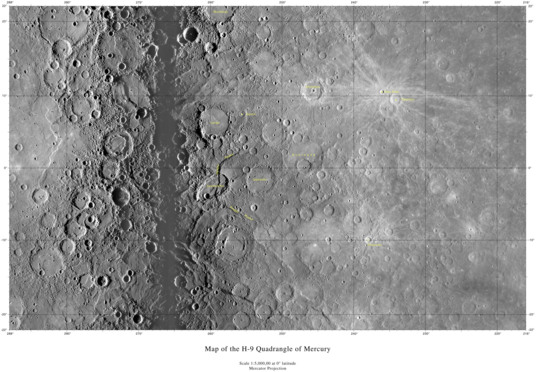 In January 2010 the United States Geological Survey published a new Mercury atlas based upon Mariner 10 images plus the near-global map of Mercury acquired during MESSENGER's three flybys. The atlas consists of fifteen individual map sheets and includes all features named to date. This is just one of the fifteen sheets, covering the area from 22 degrees north to 22 degrees south of the equator and from 216 to 288 degrees west longitude.

The photos on which the map were came from the departure images from MESSENGER's first flyby (right two-thirds of the map) and the approach images from MESSENGER's second flyby (left third of the map). A small area in between the two sets of images, near 266 degrees west longitude, was in twilight during the flybys, placing crater floors into dark shadow and crater walls into high relief. Farther away from that longitude, the Sun shone down onto the surface from higher in the sky, making topography less easy to discern. After MESSENGER's orbital mission is complete, it will have produced a new base map that does not have such uneven lighting conditions.

According to the preface to the new atlas, new feature names will be added as they are approved, so this new atlas is really just a work in progress.

I do have one complaint. Why oh why do no two mapmakers ever use the same convention for longitude? Compare the MESSENGER mission's map of the areas of Mercury that have been imaged by MESSENGER and Mariner 10 to the one above, and you'll see that the MESSENGER team has been measuring longitude positive to the east, while the USGS map has it positive to the west. It's not that the arithmetic necessary to convert between them is difficult to do. I just wish people could all just start doing it the same way so I don't have to think about it anymore. Can't we all get along? 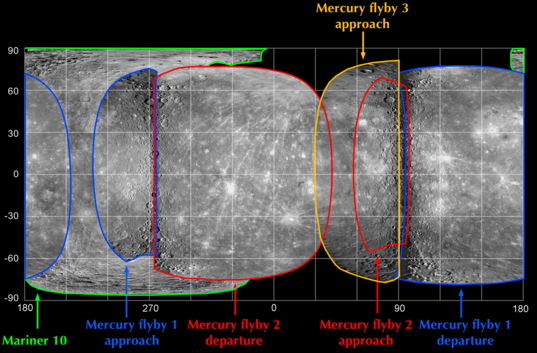 Following MESSENGER's final Mercury flyby before entering orbit, the map coverage of Mercury is nearly complete. Mariner 10 mapped about 45% of the planet (green outline). MESSENGER covered another 20% on its first flyby (blue outline). The second flyby nailed 25% more (red outline). The most recent flyby filled in another 5%, including the the last missing piece of the equator and mid-latitudes. Now only 5% of the planet remains unmapped, most of it poleward of 60° north and south latitude.