Looking over the list of planets, moons, and smaller bodies I posted so far, I realized I didn't have an image of a comet yet. There's a couple of reasons for my neglect. One is that, by and large, our imaging of comets is not particularly good. If they're active comets, they're difficult to get close to, because of the inconvenient way they throw out lots of vapor, dust, and even small particles of icy material that can be rough on a spacecraft and its instruments. Also, there's never been a mission to orbit a comet, and it's orbital missions that return the best photos. (That'll change in 2014, when Rosetta arrives at comet 67P / Churyumov-Gerasimenko.) The other reason, I think, is that, when seen up close, comets are -- how do I say this? -- I think they are ugly. Here is a gorgeous photo of a truly ugly object, comet 9P / Tempel 1, as seen by Deep Impact. This is a new color composite, assembled by Daniel Macháček using a color snapshot I put together plus lots of images from the impactor spacecraft plus lots of work. 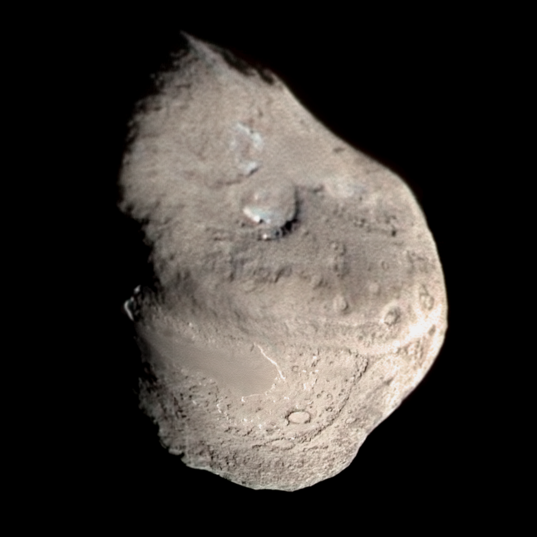 This highly processed image is composed of numerous frames captured by both components of the Deep Impact spacecraft shortly before the impactor spacecraft crashed into the nucleus of comet Tempel 1 on July 4, 2005. The color comes from three frames captured through red, green, and blue filters on the flyby craft's High-Resolution Imager, which suffered from blurred vision. The detail comes from numerous images of the nucleus captured by the Impact Targeting Sensor. Since the two cameras had slightly different points of view, the color image has been warped to line up with the more detailed impactor image.

Comets can be the most visually arresting things visible to the naked eye (at least that's what I've been told; I've only seen one comet, 17P/Holmes, which was cool but not one of the more spectacular ones). But when you get close enough to a comet to peel away its gossamer tails and coma, you find that the source of all that beauty is decay. Comets start out life as icy worlds from the outer solar system. They mind their own business for millennia, chilling out in the Oort cloud, until some gravitational interaction with some much bigger body (a resonance with Jupiter or a passing star) suddenly shifts their orbits and sends them much closer to the Sun. When these iceballs are heated, they begin to rot, blasting out their volatiles, leaving behind a holey husk of dust and grime, which rots a little more each time they approach the Sun. In this image you can see a few places where that decay may be actively proceeding -- bright spots where fresher ice may be exposed, which must surely be sublimating at a rapid rate, in what must seem like a hellish environment to this little icy world.

But it's a beautiful picture, isn't it? I can't say I understand what's going on to make the circular rims darker than the plains between them, or why there's a dark-colored belt of material above the little comet's waist, or why there's one great big hole in the upper part but nothing like that in the lower part, or why there seems to be a smooth, sharp-edged tongue of material running from left to right across the bottom part. It's all pretty mysterious. Which is why, even though I think Tempel 1 is really ugly, I can't wait until we get the chance to look at it again, in February of 2011, when the Stardustspacecraft flies by.

Day 30: Tempel 1
Each day in December I'm posting a new global shot of a solar system body, processed by an amateur. Go to the blog homepage to open the most recent door in the planetary advent calendar!