This one is fresh from the spacecraft! The data were captured yesterday, December 26, by Cassini during its best yet imaging encounter with the small ringmoon Prometheus, and showed up on the Cassini raw images website today. This is one of the more elongated moons to be seen in the solar system, almost exactly twice as long as it is wide. The word "potato" is commonly used to describe the shape of small bodies in the solar system, but I think that Prometheus, with its pointy ends, looks more like a related vegetable, a yam. 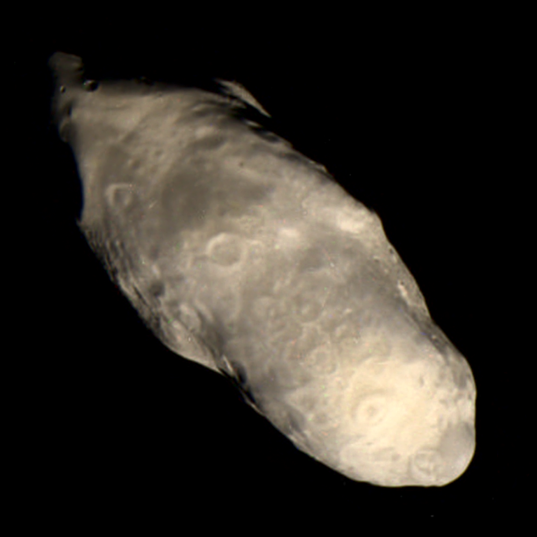 On 26 December 2009, Cassini passed within 60,000 kilometers of the moon Prometheus to capture the highest-resolution-ever views of the potato-shaped moon, the inner shepherd of the F ring. Prometheus is 119 by 87 by 61 kilometers in diameter, nearly a twin to its neighbor Pandora. This view is an RGB natural-color composite, composed from the raw images from the Cassini website. It has been enlarged by a factor of two.

All of the rest of the images posted to date in this advent calendar have been made with calibrated data from NASA's archives, but this one was not; the data are too fresh, there hasn't been time for calibration and archiving yet. The fact that we can even see data in this preliminary state is a relatively new thing for space missions. It's wonderful, because we get a chance to follow along the adventure of missions as they happen. However, it does mean that we wind up looking at images with lower quality than we will eventually be able to see. Also, like most images taken by Cassini when it is near periapsis (closest approach to Saturn), the Prometheus views were marred by lots of cosmic ray hits, bright spots and streaks caused by the charged particles flying around in Saturn's radiation belts. I erased the worst of them when I made this composite, but there are a few funny-colored spots where I missed some. I'll be able to do a nicer job with this image once the data hits the Planetary Data System next June. In the meantime, enjoy Prometheus! And if you want to see other cool data fresh from Cassini, visit the raw images website at JPL; for insight into why each image was taken, visit the Looking Ahead section at CICLOPS (and it may help you to refer to my page on Cassini's orbital tour of the Saturn system, too).

Day 27: Prometheus
Each day in December I'm posting a new global shot of a solar system body, processed by an amateur. Go to the blog homepage to open the most recent door in the planetary advent calendar!