I deliberately juxtaposed Earth and Titan. Titan is a weird alternate-universe Earth, surprisingly similar to our own planet in some ways, but not at all like our planet in others. First, the similarities. It has a mostly-nitrogen atmosphere, and a thick one; there's so much "air" on Titan that even though Titan's gravity is significantly lower than Earth's, the atmospheric pressure at the surface is actually a bit more than Earth's. Titan shares Saturn's axial tilt of about 27 degrees, very similar to Earth's 23 degrees, so Titan has polar, temperate, and equatorial climatic zones grossly matching Earth's. (Of course, the seasons are far longer because of Saturn's much longer year, lasting 30 Earth years.) The atmosphere produces weather -- clouds form and dissipate and they even rain liquid onto the surface. As on Earth, the liquid runs off, carving streams, rivers, and lakes, whence some of it evaporates again to renew the cycle. The atmosphere also has wind, which builds huge fields of sand dunes in Titan's more arid regions, just as on Earth.

As strangely familiar as Titan looks, though, it's not our hospitable world. It is cold, 94 Kelvins (-180°C or -290°F); at that temperature, Earth's liquid water would not only be frozen, it would be as hard and brittle as rock is here. Titan's rain is mostly methane, and a mix of methane, ethane, and longer-chain gunk fills its lakes. These, too, are incredibly cold. Its mostly-nitrogen atmosphere is filled out not with life-giving oxygen but with methane. And methane absorbs most of what little sunlight gets out to Saturn's distance from the Sun, leaving Titan's surface perpetually dim. Though one thing Titan gets that Earth doesn't: incredibly long periods of twilight. That's because Titan's atmosphere is incredibly tall and powerfully scattering, so there are lots of photons that bounce beyond the terminator to what's technically the night side of Titan. 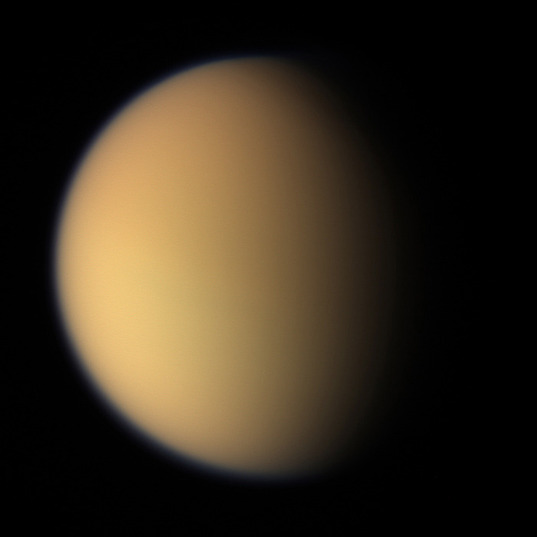 Cassini took this wide-angle natural color view of Titan on 17 April 2005 from a distance of 173,000 kilometers.

Day 26: Titan
Each day in December I'm posting a new global shot of a solar system body, processed by an amateur. Go to the blog homepage to open the most recent door in the planetary advent calendar!