I think if you polled most space fans about their favorite moons of Jupiter, Ganymede would come in a consistent third behind Europa and Io. Those other two are showier than Ganymede, Europa with its smooth, fresh surface and Io with its constantly erupting volcanoes. It's just not fair; I'd argue that if those two moons weren't around, Ganymede would probably top many people's lists of most interesting places to visit with a future spacecraft. For starters, it's the biggest moon in the solar system, bigger than Titan (and also bigger than Mercury). Ganymede's got an ocean like Europa (though it's deeper) and has fascinating "grooved terrain" indicating relatively recent geological activity. Moreover, Ganymede is the only moon in the entire solar system known to be producing its own internal magnetic field, meaning it probably has a partially molten metallic core, just like Earth and Mercury. (Here's a recent paper on that.) It's an entire world worthy of independent exploration. The view below is one of many crafted by Ted Stryk from Galileo data. 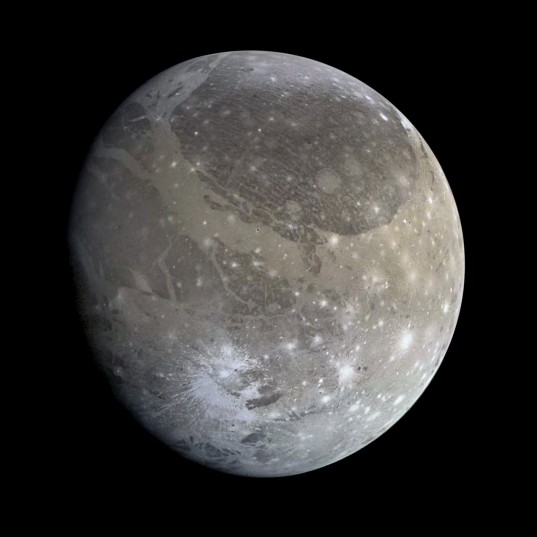 Galileo captured this global view of Jupiter during its first orbit of Jupiter.

Day 24: Ganymede
Each day in December I'm posting a new global shot of a solar system body, processed by an amateur. Go to the blog homepage to open the most recent door in the planetary advent calendar!