Mars' moon Deimos never gets as much love as Phobos. Deimos is the smaller of the two, about half the diameter of Phobos, but it's not because of Deimos' size that it's underappreciated; it's an accident of the orbits of the moons, or more accurately, the orbits of the spacecraft observing the moons. All but two of the spacecraft have had Mars orbits that lie within the 24,000-kilometer orbital altitude of Deimos.* Since Deimos, like our own Moon, always shows the same face to Mars, that means that only two spacecraft have ever been able to see anything but Deimos' Mars-facing hemisphere. Seen from that perspective, Deimos is a squarish block with a fairly smooth surface and only a couple of craters.

What we know about the rest of Deimos primarily comes from data that is nearly as old as I am, from the Viking Orbiters, mostly Viking Orbiter 2. Both of them had orbits with periapses of about 33,000 kilometers, outside Deimos' orbit, so they could view Deimos from all sides. Looking at Deimos from underneath reveals the oddest thing about the moon: its southern "hemisphere" isn't hemispheric at all, it's totally concave. This must be the scar of an impact so big that it's hard to understand how the rest of the moon could have survived as a coherent entity. It's been hypothesized that the reason the rest of Deimos is so smooth is that we're seeing the granular deposit of all the stuff that was blasted out of the crater when the impact happened, after it re-accreted onto the surviving core of the moon.

I'd never seen any color images of Deimos from Viking, so I decided to dig in to the original data set and see what I could produce. That hunt was interesting enough that I'll do another post on it in the future. In the meantime, here's the best color composite on Deimos I've managed to produce so far. We're seeing the moon at about 90° or half-full phase, lit from the left, and we're looking down into that bowl of a southern "hemisphere". The sunlit rim of the impact crater curves around it, making Deimos look like an apostrophe floating in space. 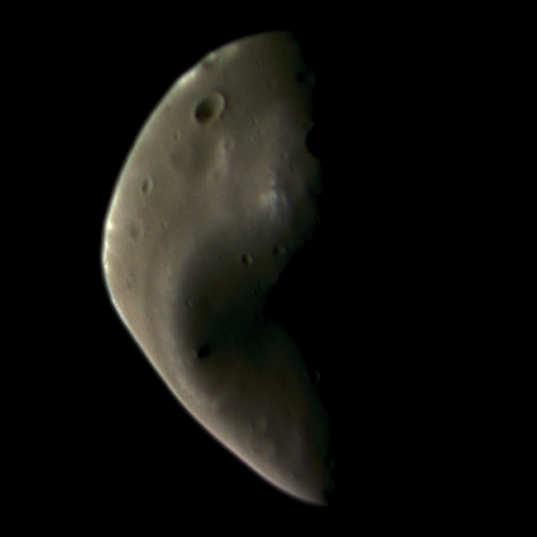 Deimos in color from Viking Orbiter 2

This image of Deimos is composed of four images taken by Viking Orbiter 2 on August 25, 1977 through red, green, violet, and clear filters.

*Actually it looks like the Soviet Mars 2 and Mars 3 spacecraft had bigger, elliptical orbits, but as far as I know neither one ever imaged Deimos.

Day 23: Deimos
Each day in December I'm posting a new global shot of a solar system body, processed by an amateur. Go to the blog homepage to open the most recent door in the planetary advent calendar!