Not quite ten years ago, the Near Earth Rendezvous (NEAR) spacecraft arrived at the near-Earth asteroid Eros. NEAR accomplished many firsts. It was the first spacecraft to orbit an asteroid (and there has been only one other since), and, in an incredible finale to its mission, it actually touched down on the asteroid's surface. At the same time, it was the first in the Discovery line of relatively low-cost, missions, each led by a single principal investigator and required to launch within a few years of their selection. Others in the Discovery line have included Mars Pathfinder, Lunar Prospector, CONTOUR, Deep Impact, Genesis, Stardust, MESSENGER, Dawn, and Kepler. Altogether it's been a highly successful mission line.

I haven't seen very many amateurs working with pictures from the NEAR mission, so I was very pleased when Daniel Macháček showed up on unmannedspaceflight.com a couple of months ago with his work on Mathilde, an asteroid that NEAR flew past before its encounter with Eros. I asked him to put together something on Eros, and here it is. 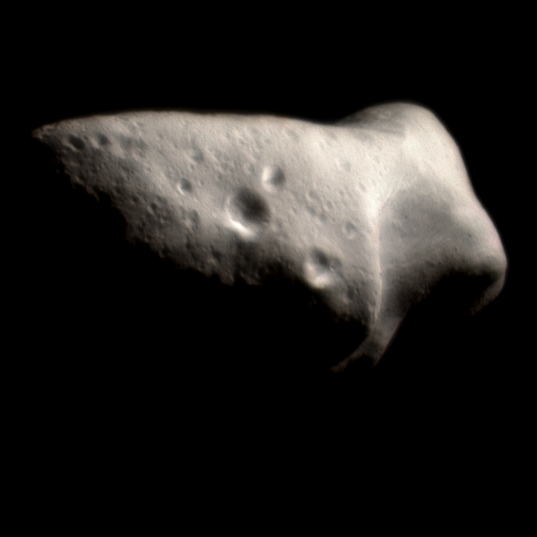 NEAR took the images for this photo of the asteroid Eros on February 25, 2000. Eros has a highly irregular shape 34.4 by 11.2 kilometers in diameter. The image is a mosaic of four photos taken in infrared wavelengths, with color provided by lower-resolution frames captured through red, green, and blue filters.

If you'd like to see more of NEAR's images from Eros, here's a great website put together by Mark Robinson, who's now the principal investigator on the Lunar Reconnaissance Orbiter camera.

Day 19: Eros
Each day in December I'm posting a new global shot of a solar system body, processed by an amateur. Go to the blog homepage to open the most recent door in the planetary advent calendar!