Mimas is the anti-Enceladus. At 397 kilometers in diameter it is not all that much smaller than 512-kilometer Enceladus, the next biggish moon out. But its ancient, cratered surface tells you that nothing particularly exciting has happened there over the past few billion years, unlike on geyser-rich Enceladus. When people post a picture of Mimas, they usually post one that includes a view of its gigantic crater, Herschel, and make a comment about how much it looks like the Death Star. So, to be different, I'm posting a view of Mimas that almost doesn't include Herschel. The crater is there -- it's taking a bite out of the terminator at left. 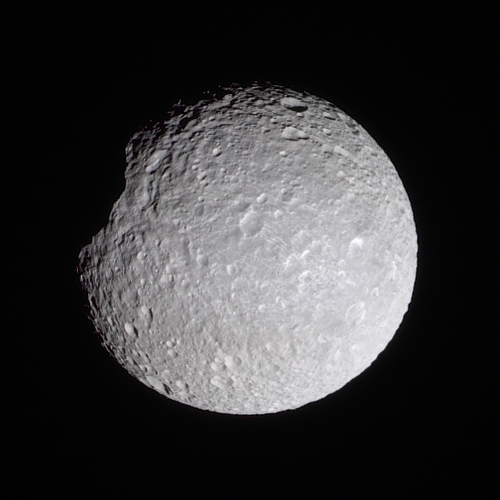 Cassini took the images for this color view of Mimas on 28 June 2007. The heavily cratered little world is more elliptical than spherical. Its largest crater, Herschel, is the bite out of the terminator at left.

This photo is actually in color, believe it or not; Mimas is very, very gray. Mimas is also not a sphere -- it's squashed around the middle, a result of its relatively fast rotation coupled with its relatively low gravity and its relatively close position to Saturn, which excites a pretty big tidal bulge. All in all, Mimas' surface tells you a great deal about the forces active within the Saturn system that act from the outside to control the shapes and surfaces of Saturn's moons.

Mimas sits on the boundary between round moons and lumpy "rocks." It has just enough self-gravity to be round -- or mostly so; the impactor that made Herschel came along relatively late in Mimas' formation, when the moon was pretty cold. The next smaller moons at Saturn are Hyperion, Janus, and Phoebe, all of which are very lumpy indeed. I think it's interesting how the roundness of these icy worlds depends in part on the timing of large impacts. Large impacts were undoubtedly part of the story of formation of these things, but early in their history they would have had enough primordial heat for their interiors to be relatively squishy (even if not liquid). As they aged, cooled, and hardened, impact scars were better and better preserved. I wonder if Mimas is rounder than Hyperion because it's closer to Saturn, experienced more tidal heating, and had some earlier lumpiness erased? Each one of these moons has its own, unique story to tell.

Day 16: Mimas
Each day in December I'm posting a new global shot of a solar system body, processed by an amateur. Go to the blog homepage to open the most recent door in the planetary advent calendar!