Here's another weird-looking one, though it's less weird from this particular, polar point of view than it is when viewed from the side. Atlas orbits Saturn just outside the A ring. But like the moons that orbit within the ring system (namely, Pan and Daphnis), Atlas' shape is also powerfully influenced by the rings. All three of these moons appear to have collected a large amount (relative to the size of the moons, that is) of ring material in a dusty deposit built up at the moons' equators, giving all three of them a flying-saucer-like shape. Being the farthest from Saturn and also, at 32 kilometers in diameter, the largest of the three, Atlas is the one that has been photographed in the most detail by Cassini, including this view from below, taken on June 12, 2007. 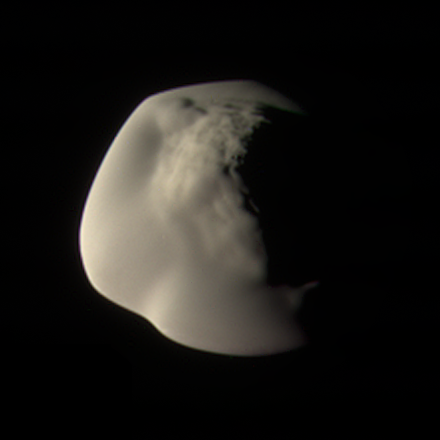 Cassini flew to within 40,000 kilometers of Atlas on 12 June 2007 to capture this view of the unusually-shaped moon. The view is toward Atlas' south pole, showing Atlas' strange "flying saucer" shape from below. The "dish" of the saucer is made of dust collected from Saturn's rings.

Day 9: Atlas
Each day in December I'm posting a new global shot of a solar system body, processed by an amateur. Go to the blog homepage to open the most recent door in the planetary advent calendar!