Umbriel is the darkest moon in a pretty dark place in the solar system, the Uranus system. Pretty much everything we know about its surface is based on about 10 images captured by Voyager, which show only its southern hemisphere because it was summer at Uranus when Voyager flew past. Apart from that, there have been spectral studies from Earth-based telescopes that cannot actually resolve individual features on its surface. Since Voyager, astronomers have taken advantage of the Uranian equinox to attempt to learn about features on the northern hemispheres of the moons of Uranus; I haven't heard of any results yet published that were based on those observations, though. So the image below represents nearly all we know about it. Not much, and -- the achievement of the Voyager missions and the skill of Ted Stryk notwithstanding -- not really a very high-quality photo. 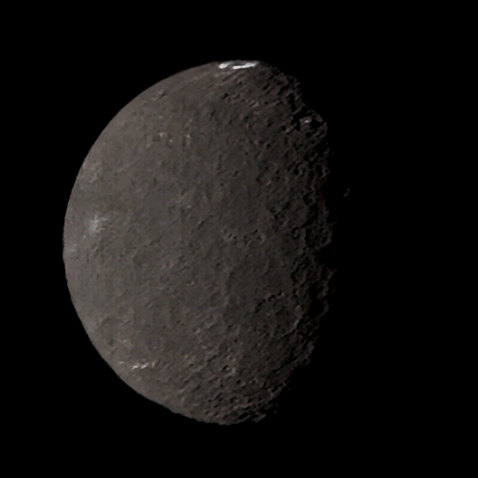 Voyager captured this view of Uranus' moon Umbriel from a range of slightly more than a million kilometers on January 24, 1986.

The Voyager images of the Uranian moons are not as good as its images from Jupiter and Saturn in part because Voyager's cameras were not designed for use under such low light levels. Sadly, I don't expect to see an orbital mission to Uranus in my lifetime (though I would be delighted to be wrong about that); I think that if we do send an orbital mission that far out, it will go instead to Neptune and its fascinating moon Triton. But I think that a modern flyby spacecraft supplied with extremely high-resolution cameras designed for such low light levels -- something like New Horizons-- would actually produce a huge amount of science at Uranus, particularly if it could manage to carry along and drop off a Uranus atmospheric probe as it passed through.

Day 6: Umbriel
Each day in December I'm posting a new global shot of a solar system body, processed by an amateur. Go to the blog homepage to open the most recent door in the planetary advent calendar!