From a distance, Jupiter's fourth largest moon Europa is the smoothest object in the solar system; its outline traces out a perfect circle. (Actually, before any pedants email me, I should amend that to say it's slightly elliptical, due to equatorial bulging from its spin, and also due to tides from Jupiter, but my point here is that the curve is unusually close to a mathematically exact one.) Seen up close, Europa bears almost no impact craters, an immediate clue to geologists that its entire surface has been reshaped recently enough that the vast majority of the impact craters that must have formed there in the past have been erased, wiped clean. The combination of smoothness and recent geologic activity strongly suggests volcanism, but the evidence for recent volcanism on Europa is pretty thin. Instead, seen very close, Europa is seamed with criscrossing paired ridges. In some places, its crust is broken up into jagged, tilted blocks that make it look as though the layer of liquid water that lies tens of kilometers underground somehow melted all the way through to the surface. For reasons that I'll state in more detail in my 365 Days of Astronomy podcast this Saturday, that's physically unlikely. Despite being a major focus of the Galileo mission, Europa is still pretty enigmatic. We need to go back! 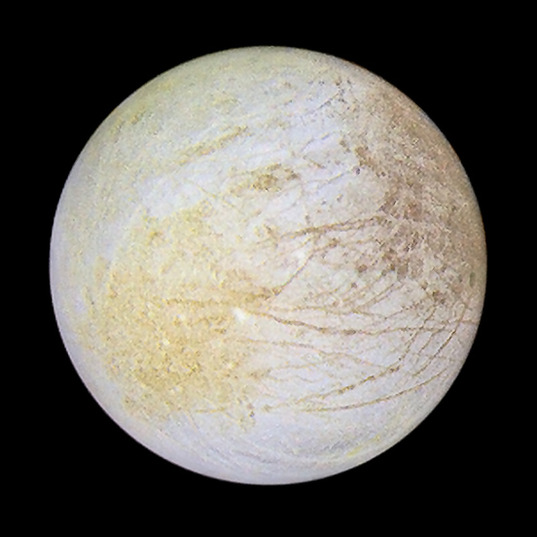 Galileo captured this global view of Europa on its 9th orbit of Jupiter, on June 27, 1997.

More of Ted's awesome work on Europa can be found on his blog, particularly here.

Day 3: Europa
Each day in December I'm posting a new global shot of a solar system body, processed by an amateur. Go to the blog homepage to open the most recent door in the planetary advent calendar!