Opportunity has paused for a few sols to examine a large rock that, for once, is not a meteorite. This one is named "Marquette Island." Among the work they've been doing on Marquette is to take a 13-filter set of Pancam images, which can be merged in various combinations to study how the color of Marquette differs from its surroundings. More scientifically, the rover data can be used to study Marquette's spectral properties, which are related to its composition (or at least the composition of its surface), but the raw images aren't suitable for that kind of spectral analysis. They can be used to make neat pictures though! 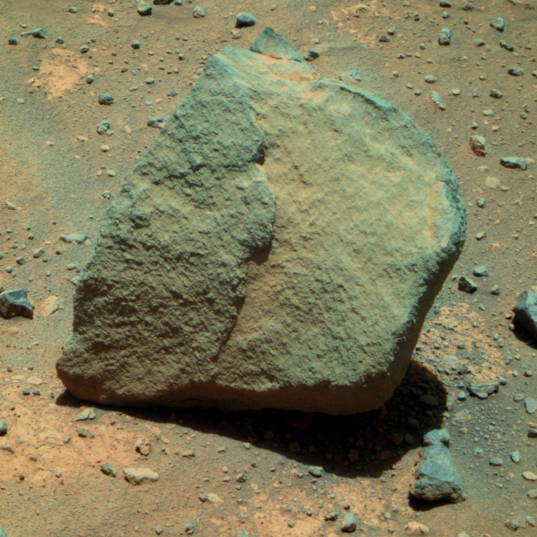 It looks like they are now going to try to brush at the surface to see if the color -- which looks an awful lot like the soil behind it -- changes when the surface coating of dust is brushed off. Here's a fresh-from-Mars Hazcam image of Opportunity's RAT poised on the surface of Marquette Island. 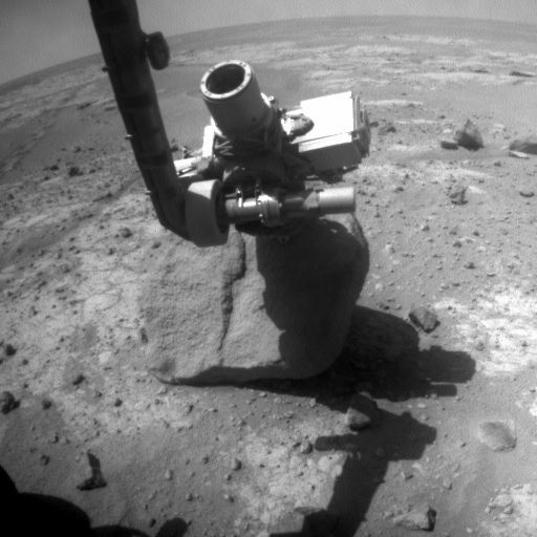 Opportunity paused in its trek toward Endeavour crater to place the Rock Abrasion Tool on a rock named "Marquette Island."

Finally, in the outer solar system, Cassini's been taking movie pictures again. This is a particularly nice set; Enceladus is the moon held still in the viewfinder while Rhea rushes behind it.

Cassini spotted Rhea passing behind Enceladus in this 20-frame animation from 15 November 2009.

Learn how to find and process these and more images tomorrow!