Thanks to Mike Malaska for the tip on this one. The image is part of an animation that ends with Rhea transiting Saturn. In the middle of the sequence, Cassini's narrow-angle camera captures four of Saturn's moons in the same shot -- a rare opportunity. The moons are (from left to right) Mimas, Janus, Rhea, and Pandora. The moons that are closer to Cassini than Saturn (Rhea and Janus) have dark nightsides because we see the sides of them that do not face Saturn. The moons that are on the far side of Saturn from Cassini have bright nightsides, because they are illuminated by Saturnshine. 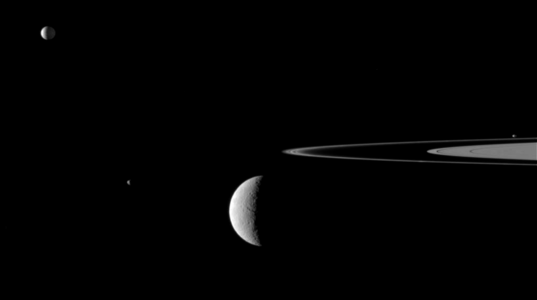 On November 8, 2009, Cassini captured a view of four moons at the same time, along with the ansa of the F ring. The largest moon is Rhea. To the left of Rhea are Janus and Mimas; Mimas' nightside is brightly lit by Saturnshine, and its out-of-roundness is evident. Above the F ring, toward the right side of the image, is Pandora.