Planetary Radio Q and A: Are meteorites on Mars actually interesting?

This week's Planetary Radio features Ann Druyan on the legacy of Carl Sagan on the occasion of what would have been his 75th birthday, and on The Planetary Society's announcement today of the LightSail project. On "Questions and Answers" I answered this question:

"The Mars Exploration Rover Opportunity has been studying a lot of meteorites. That made me wonder, why study meteorites on Mars when we can study them in hand on Earth? How are Mars meteorites interesting?"

I had help on this question from cosmochemist Meenakshi Wadhwa. 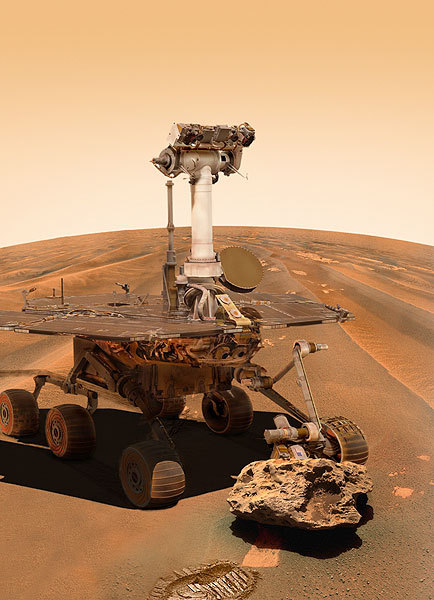 An artist's impression superimposes Opportunity onto the Martian landscape near the iron-nickel meteorite Block Island, which is the largest meteorite that either of the two rovers has found to date.

The meteorites at Meridiani Planum have, in all likelihood, been sitting there for a very long time. During that time, they have interacted chemically and geologically with the surface and near-surface atmosphere, so their current composition can tell us about chemical behavior on Mars.

One of the meteorites, a metallic one named Block Island, has given us an important clue to Mars' past just by virtue of its large size. At the current thickness of Mars' atmosphere, a meteorite the size of Block Island would have disintegrated into much smaller fragments on impact with the Martian surface. So the meteorite must have fallen at a time when Mars had a significantly thicker atmosphere that would have decelerated the meteorite, slowing its crash into the ground.

Also, Opportunity's chemical analysis instruments observed varying composition on different parts of Block Island, which may indicate different states of alteration. Since meteorites are a fairly well-studied class of objects, we know a lot about what the starting composition must have been, so the current chemical composition can provide important clues to the chemistry that has operated on the Red Planet since the meteorite fell.