While I was on maternity leave I suddenly decided to see what books were out there that could help me teach my daughters (one's three years, and the other six months old) about the science and the thrill of space exploration. I bought a pile of them, finding a few that I really enjoyed. I reviewed two of them (Faces of the Moon and Cars on Mars) for the most recent issue of The Planetary Report (we always run a bunch of book reviews in our September-October issue), but thought it'd be helpful to you all to review more of the books here. I'll begin with the books I recommend, and include afterward the books I was less excited about.

One thing that has disappointed me is that I have not found a good book currently in print that introduces the planets (any or all of them) to preschoolers. There is a wonderful one called My Book of Planets which I reviewed for The Planetary Report last year, but it only seems to have been available from in-school book fairs conducted by the publisher Scholastic. Apart from that, though, the only recent space books I found for preschoolers or young kids focus almost entirely on the Moon, because they either focus on what kids can see in the sky (waxing and waning Moon) or human exploration. If anyone has any planet-themed books to recommend for my kids, please send me an email! 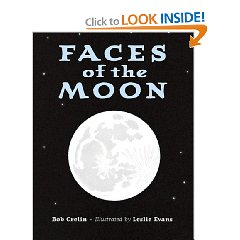 Among my daughter Anahita's earliest words was "Moon." She'd point it out in the sky whenever she saw it, which wasn't usually at night; it was usually in the morning or evening when we were out and about. But sometime during the last year, popular culture (or toddler culture, anyway) has "taught" her that the Moon is out only at night. Failing to find a book appropriate for preschoolers that discussed the Moon's phases and the fact that it can be seen in the daytime too, I even considered writing one myself. Now I don't have to, because Bob Crelin has done it, and done it admirably, in Faces of the Moon.

The book is written in verse and has beautiful, bold, block-printed illustrations by Leslie Evans that will appeal to young children, but the concepts it teaches work well for older children (and even adults). As the verse defines "new," "crescent," "quarter," "gibbous," "wax," and "Wane," cutouts in the pages cleverly show only as much of the Moon as is visible during each phase; along with tabbed page edges, the book's design helps to hold the attention of younger kids.

The quality of the verse is way above the average for educational kids' books. For example: "A few days pass, and Moon's less shy;/ her smile lights the twilight sky./ The more her sunlit surface shows, the more Moon's WAXING CRESCENT grows."

A final two-page spread provides more detailed information for older children, parents, or teachers; a teachers' guide is available from the author's website. I'm sure there are plenty of adults who will learn a thing or two about lunar phases from this book! 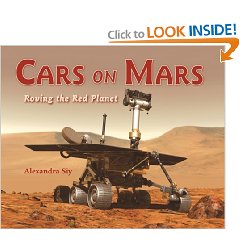 Cars on Marsis a detailed travelogue for kids of all ages of the amazing journey of the Mars Exploration Rovers. It covers Spirit and Opportunity's voyages, from their launches in June 2003 up to late 2008, toward the end of their third Martian winter, as Spirit was parked on the north edge of Home Plate and Opportunity had departed Victoria crater to embark on the long journey to Endeavour. Along the way, Siy's energetic narrative captures the excitement and challenges of the twin rovers' different journeys at the same time that it explains the capabilities of the rovers and their instruments. (It helps that Siy quotes rover principal investigator Steve Squyres extensively, calling him "Steve" throughout.)

The book is absolutely crammed with pictures, most of them full-color Pancam shots of the Martian landscape, including many panoramas. Each picture is accompanied by a detailed caption. Although the publisher identifies the age range of the target audience as ages 8 and up, I'd emphasize the "and up" part. There is plenty of detail here to delight both kids and adults, even adults who have been following the missions closely. 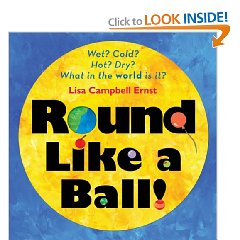 In Round Like a Ball a family plays a guessing game, each one taking turns guessing the answer to such clues as "It's round like a ball and is always moving" and "It's round like a ball and is hot and cold." With each clue, circular cutouts in the right-hand page increase in size to slowly reveal an object swirled with blue, white, and green. Spoiler alert: the answer to the guessing game is the Earth. The chief educational message of the book is to encourage young readers to conceptualize Earth as a planet, one that encompasses many opposites -- hot and cold, wet and dry, strong and fragile.

The book's eco-friendly message is not too heavy-handed, eschewing the "be green or we're all going to die" approach in favor of the statements "it's home to all of us" and it "must be handled with care." The family playing the guessing game is very multiethnic and includes the family dog and cat. (The cat, of course, guesses that the object being hinted at is a fishbowl.) The very last page reviews all the clues as it unfolds into a large painted poster of Earth, a feature that my daughter loves but which might not survive a house containing more rambunctious kids. 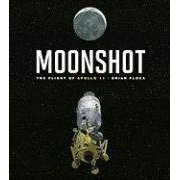 Moonshot relives the dramatic adventure of the Apollo 11 mission to the Moon. The text consists of spare, tight blank verse that somehow manages to thrill the heart as it economizes on words, while the pen-and-ink illustrations evoke the adventures of superheroes in graphic novels. I am too young to have been one of the millions on Earth who were glued to their televisions for those dramatic days in 1969, but while reading Moonshot I felt a little of the excitement and fear that the people back home must have felt as they listened to the crackly reports of the astronauts coming across the airwaves. The book doesn't just have this effect on humble space enthusiasts; astronaut Michael Collins says in a blurb on the book's cover that "Reading Moonshotgave me the feeling I was back up in space."

Although the text is spare, short, and evocative, the sentence structure and vocabulary are a bit advanced for the younger end of the cited age range, and my daughter is not yet interested in it. I think I'll put it on a higher shelf until she's perhaps six years old. And I think the publisher does a disservice to the book by stipulating the upper appropriate age as eight; the way that this book so effectively stirs the emotions of the reader, and the graphic-novel style of its illustrations, should appeal to much older kids. Although it's a picture book, it doesn't feel like a kids' book -- it feels almost like the storyboard for a movie.

On the Moon uses simple language to present a generic Apollo journey to the Moon, inviting children to imagine themselves as the astronauts. The illustrations consist of cartoon astronauts and spaceships overlaid on artistically enhanced Apollo photography of lunar landscapes and mother Earth, which does a terrific job of encouraging the children to imagine the adventure in a landscape that is very real, but very strange. The text encourages a sense of wonder at this strangeness: "The Moon is silent, empty, and dusty. There are huge mountains...and big holes. But there are no trees or water, no animals or people." At the end, after the astronauts depart, "The Moon is left almost as it was before, apart from a flag and a buggy, and some footprints in the dust." Finally, the book closes with: "Do you think you'll ever go to the Moon?" I wonder how many parents -- or grandparents -- now reading this book to children had childhood fantasies of lunar travel? 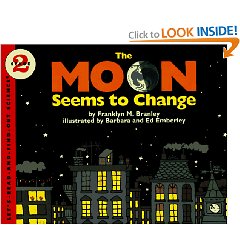 The Moon Seems to Change is a nonfiction book explaining lunar phases, with lots of helpful illustrations and some suggested demonstrations that can be tried at home or in the classroom. It's not in verse and is somewhat pedantic in narrative style, so my 3-year-old has no interest in it; it seems that it would appeal more to the older end of the cited age range, perhaps 7- to 9-year-olds. 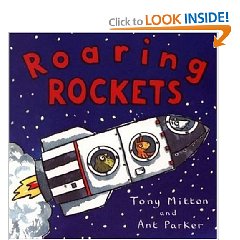 This is a book that my daughter and I disagree sharply on. She loves the rhyming and the cartoony illustrations that accompany the story of astronauts blasting off in a rocket to take a trip to the Moon, gather samples, and return home with a splash-down. But I wince every time I have to read the thumpety-dump verse, such as "Rockets go far. Through space they zoom, reaching as far as the big, round moon." And the text makes repeated reference to "gravity boots" by which they mean astronauts' spacesuit boots. The back page explains to the reader that "gravity keeps us on the ground, but there is not a lot of gravity on the moon, so astronauts wear these boots to stop them from floating away." Ugh. 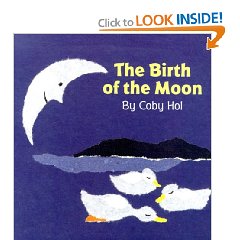 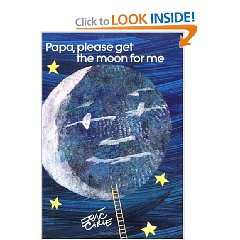 I include The Birth of the Moon and Papa, Please Get the Moon for Me in this roundup as examples of lovely stories in beautifully-illustrated books for preschoolers that "teach" the reader that the Moon is a nighttime object only. Both of these books present imaginative stories about why the Moon waxes and wanes, introducing those terms as new vocabulary for young readers. But both books assume as a matter of course that the Moon is only visible at night.

In The Birth of the Moon, the Sun creates the Moon because the animals are begging for light at night. The Sun cannot shine at night, he responds, because when it's nighttime he is busy lighting up the day for the animals on the other side of the world; but he can provide the Moon, which starts out as a skinny crescent but over time grows and grows. Over the same time, the animals come to take the gift for granted, so the angry Sun takes the Moon away, shrinking it night after night.

In Papa, Please Get the Moon for Me, the father responds to his daughter's request by getting a very long ladder (so long that it requires the pages to be unfolded to panoramic width) and put it on the top of the tallest mountain to bring down the Moon, but the Moon advises that the father wait until the Moon has had time to grow small enough for the father to carry it. This book is really not so much about the Moon as it is about all the folding and unfolding of the pages that is necessary to accommodate long ladder, tall mountain, and huge Moon.