Data from Kaguya's prime mission to the Moon has been released

Yesterday, the Japanese space agency announced the public release of the data from the primary mission of the Kaguya (a.k.a. SELENE) lunar orbiter. The release covers the period from December 21, 2007 to October 31, 2008, and includes data from all of the science instruments (which excludes the HD camera, not a science instrument). This release formally opens up the data for use by all scientists and enthusiasts around the world, not just the Kaguya science team, and will be a rich resource for lunar scientists.

The data can be accessed through form-based or map-based interfaces, neither of which I found to be entirely intuitive. So rather than trying to figure it out myself, I posted on unmannedspaceflight.com about the data release and sat back to wait for those guys to crack it open. The first thing of interest to most of them was Kaguya's new topographic map of the Moon derived from its Laser Altimeter experiment, which was promised to be vastly superior to anything we have had in the past.

It appears that Kaguya has delivered on that promise. The guys at unmannedspaceflight are saying that the new topographic map delivers much more realistic-looking 3D-rendered views of the Moon than they have been able to produce previously. First, here's a qualitative look at the map. This version was produced from the archived data by Doug Ellison. It's centered on the lunar farside, which is where on the Moon you can find the most exciting action, topographically speaking. 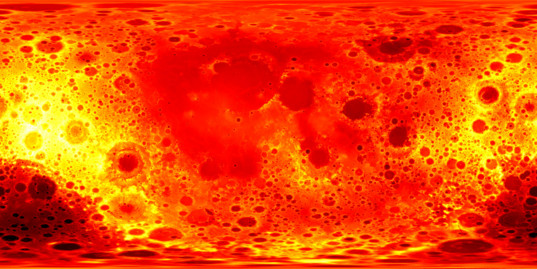 One of the prizes from JAXA's Kaguya mission to the Moon was a map of lunar topography far superior to anything that preceded it. Here, black indicates low elevations, reds medium elevations, and yellow to white the highest elevations. The map is centered on the lunar farside, which includes the south pole-Aitken basin (a huge depression at the bottom center of the map) and the highest terrain on the Moon, the mountainous area on the basin's rim.

This next map is identical to the previous one; I've just shifted it 180 degrees to center it on the much subtler topography of the nearside.

Here's a couple of example simulated views of the Moon made with this topographic map: 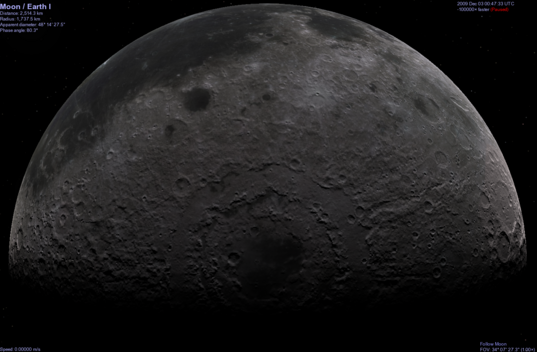 Jason Perry used the Kaguya topographic map of the Moon in Celestia to produce this simulated view of the Moon centered on the Orientale basin.

This one is really beautiful. On the left, under high sun, we see the contrast between bright-colored highlands and dark-colored mare; at the center, under low sun, those differences evaporate (and there's almost no mare basalt anyway) so we see light Sun-facing crater rims and dark shadows. 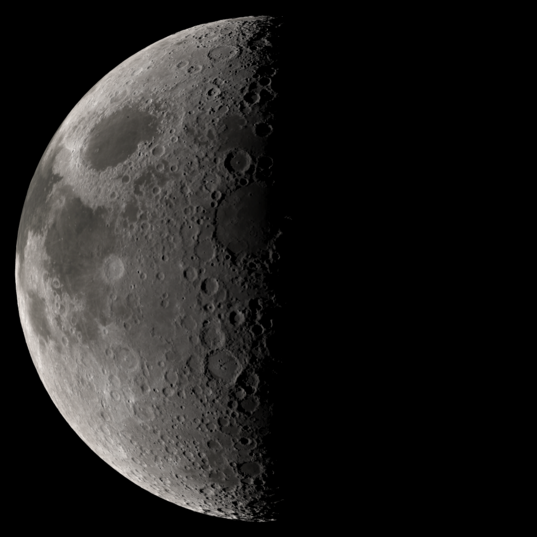 Björn Jónsson created this simulated view of the Moon using Kaguya's topographic data set. The "viewer" is located 6100 km (roughly two lunar diameters) from the Moon's center with a field of view of 35 degrees. The "sub-spacecraft" point is at 10°S, 270°W.

Bjorn produced the rendering below to show the resolution limit of the Kaguya data set. Get too close to the simulated "Moon," and the crisp topography begins to melt into blobbiness; the detail of the topographic map is not high enough to support a view this close. 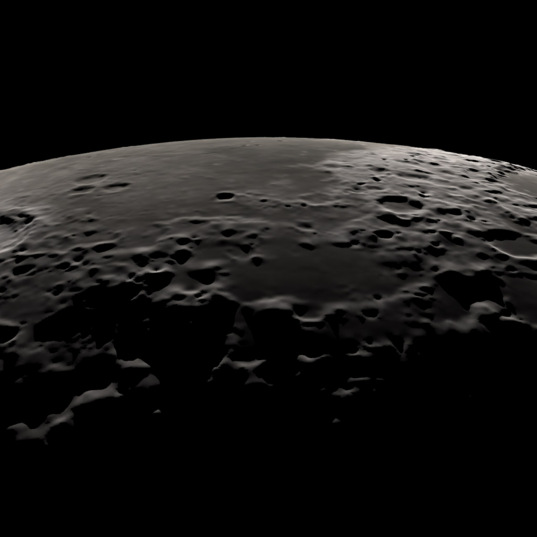 This simulated view of the Moon is from a perspective positioned only 300 kilometers from the surface. So close to the Moon, the resolution limit of the Kaguya topographic data becomes apparent, resulting in a rounded texture to the rendering.

None of us is sure if the data being used here represents the maximum resolution that can be obtained from the Kaguya laser altimeter data set; whether it is or not, Lunar Reconnaissance Orbiter's LOLA instrument should be able to improve on it.

I'll leave you all with this neato rotation movie that Jason Perry put together.

The postscript that has nothing to do with Kaguya: There was a MESSENGER press briefing today with some cool results from the third Mercury flyby. It looks like I'm not going to get a post on that done today -- hopefully tomorrow.