Saturn shadows shift with the seasons

So many goodies on the Cassini raw images website lately! I am especially excited when Cassini takes photos through red, green, and blue filters so that it's possible to create views that look roughly like what you'd see with your own eyes. Here's one such set combined into a color image; the color's far from exact, though. It was the best I could do with the versions posted on the raw image website. Better will have to wait for the data to be archived with the Planetary Data System. 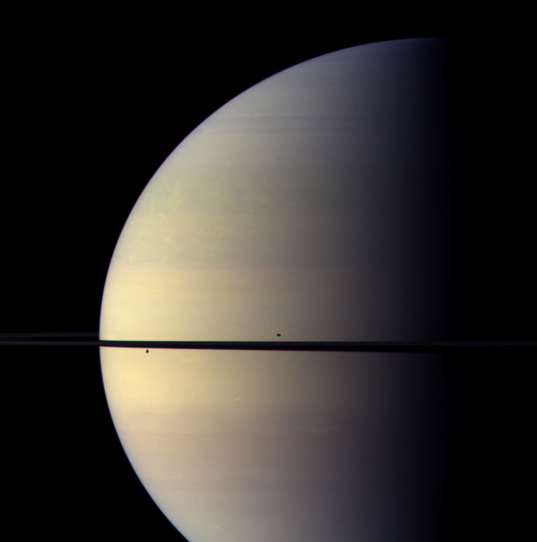 Cassini viewed Saturn from the side on 17 October 2009. Just two months after equinox, the shadow of the rings is beginning to spread southward. The bright moon Enceladus sits on the face of the disk just below the rings.

There's a puzzle in this image. I could use the Solar System Simulator to figure out that the little moon that's sitting on the face of Saturn is Enceladus. Enceladus orbits outside the main ring system. The fact that it is below the rings tells me that Cassini is on the north side of the rings, looking "down."

It turns out that although the moons orbit very close to the plane of the rings, most of them have some small orbital inclination. In particular, Mimas' orbit is inclined at 1.53 degrees to the ring plane, and Tethys' is inclined at 1.86 degrees. (I always find these and other data on the orbits and sizes of moons at the National Space Science Data Center.) The photo above was taken when little Mimas was between Saturn and the Sun, and when Mimas happened to be on the northward leg of its inclined orbit, so its shadow falls to the north of the rings. Incidentally, Mimas' inclined orbit is one of the main reasons for the cool vertical structures that the recent equinox made visible in Saturn's rings; as Mimas bobs up and down on its one-Earth-daily orbit, its gravity tugs ring particles upward and downward, especially at spots within the rings where there are orbital resonances with Mimas.

Gordan Ugarkovic took a similar view of Saturn taken one Earth day later (so Mimas' shadow is in the same position) and compared it to some earlier Cassini photos from similar orientations. I love this montage; it neatly summarizes the way the shifting seasons have changed lighting conditions in Saturn's northern hemisphere, and how Saturn's color has been changing as Cassini watches.

Cassini arrived at Saturn just past the southern summer solstice; by 2009, it had witnessed the equinox. These three views of Saturn were captured by Cassini in March 2006, July 2007, and October 2009, as Cassini orbited in Saturn's ring plane. From that point of view, the massive ring system collapses into a thin line crossing the image.