Checking in on Cassini's raw images this weekend, there are several nice shots to play with, including the many frames from which I tossed together this cute animation. Saturn's icy moons are so bright and crisp, Titan always appears like a fuzzy dark blob next to them. I like how you can see just a little bit of Tethys rotation over the course of this animation.

I can't decide which is cooler; the animation above, or a still taken from it. Here's a version of a still by Gordan Ugarkovic, artificially colorized. The original animation didn't contain any frames shot through color filters, but all he had to do was to paint Titan with a smoggy orange color. 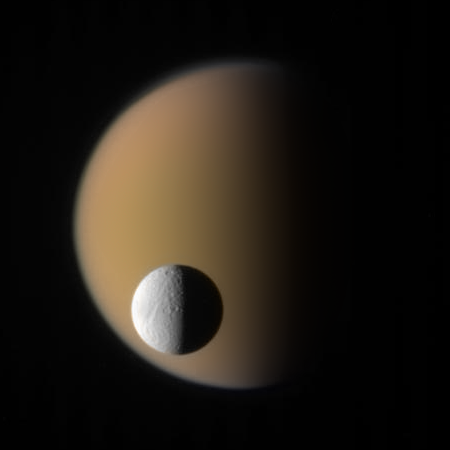 Cassini captured a grayscale animation of Tethys crossing in front of Titan on 17 October 2009. In this version, Gordan Ugarkovic has colored in Titan based on its color as seen in previous Cassini photos.