Here's the sharpest optical image shown today of the Moon, from Palomar Observatory. You can see a notch in the bright mountain ridge in front of the crater, and a sunny spot on the far wall, which together appeared to look like a plume and its shadow in the much blurrier MMT image posted earlier. I see no plume in this image, and Jennifer Heldmann, who coordinated the Earth-based observations, didn't see one either.

EDIT 8:50 a.m.: I've replaced the image I originally posted (which came from a PDF file posted on the LCROSS wbesite) with one that came directly from Palomar Observatory, which is slightly sharper and presumably at its correct native resolution. 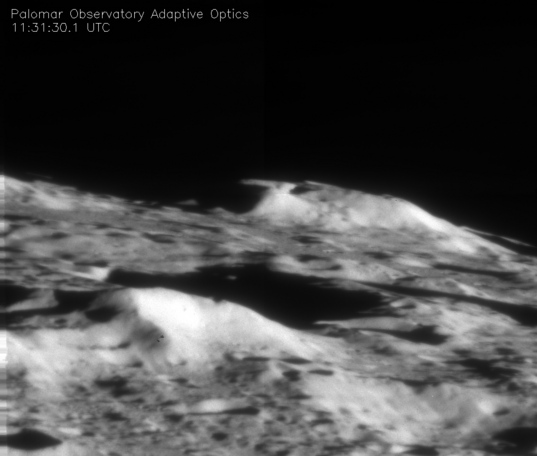 This sharp image of the crater Cabeus near the Moon's south pole was taken by the Palomar Observatory's 200-inch telescope using its adaptive optics system. The image was taken at a near-infrared wavelength of 2.1 microns. No impact plume is obvious, but analysis of the data may yet reveal something subtle in the shadows within the crater.